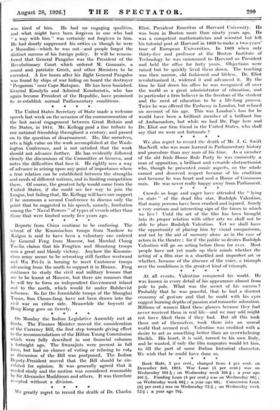 Page 3, 28 August 1926 — On Monday the Indian Legislative Assembly met at Simla. The
Close

On Monday the Indian Legislative Assembly met at Simla. The

Finance Minister moved the consideration of the Currency Bill, the first step towards giving effect to the recommendations of the Hilton Young Commission which were fully described in our financial columns a fortnight ago. The Swarajists were present in full force, but had no chance of voting or refusing to vote as discussion of the Bill was postponed. The Indian Deputy-President moved that the Bill should be cir- culated for opinion. It was generally agreed that it needed study and the motion was considered reasonable by Sir Alexander Muddiman and others. It was therefore accepted without a division.