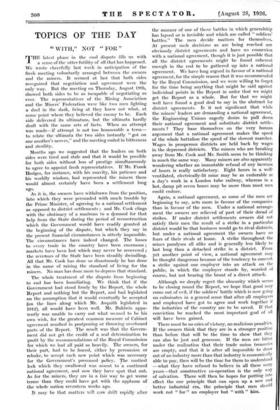 Months ago we suggested that the leaders on both sides were tired and stale and that it would be possible for both sides without loss of prestige simultaneously to agree to appoint fresh representatives. If Mr. Frank Hodges, for instance, with his suavity, his patience and his worldly wisdom, had represented the miners there would almost certainly have been a settlement long ago.

As it is, the owners have withdrawn from the position, into which they were persuaded with much trouble by the Prime Minister, of agreeing to a national settlement as opposed to district settlements ; and Mr. Cook clings with the obstinacy of a madman to a demand for that help from the State during the period of reconstruction which the Government would have readily granted at the beginning of the dispute, but which they say in the present financial circumstances is utterly impossible. The circumstances have indeed changed. The losses to every trade in the country have been enormous ; markets have been lost which may never be recovered ; the revenues of the State have been steadily dwindling. All that Mr. Cook has done so disastrously he has done in the name of raising the standard of living for the miners. No man has done more to depress that standard.

The whole treatment of the dispute from beginning to end has been humiliating. We think that if the Government had stood firmly by the Report, the whole Report and nothing but the Report, and had legislated on the assumption that it would eventually be accepted (on the lines along which Mr. Asquith legislated in 1912), all would have been well. Mr. Baldwin appa- rently was unable to carry out what seemed to be his own wish, for the greatest common measure of Cabinet agreement resulted in postponing or throwing overboard parts of the Report. The result was that the Govern- ment did not get the credit of a real determination to profit by the recommendations of the Royal Commission for which we had all paid so heavily. The owners, for their part, had to be forced, either by persuasion or rebuke, to accept each new point which was necessary for the Government's presumed policy. The nastiest leek which they swallowed was assent to a continued national agreement, and now they have spat that out. As for the miners, they are in a fair way to get worse terms than they. could have got with the applause of the whole nation seventeen weeks ago.

It may be that matters will now drift- rapidly after the manner of one of those battles in which generalship has lapsed or is invisible and which are called " soldiers' battles." The men decide matters for themselves. At present such decisions as are being reached are obviously district agreements and have no connexion with a national agreement, though it is just possible that all the district agreements might be found coherent enough in the end to be gathered up into a national agreement. We have long argued in favour of a national agreement, for the simple reason that it was recommended by the Royal Commission, and we were willing to forget for the time being anything that might be said against individual points in the Report in order that we might get the Report as a whole. But for that we might well have found a good deal to say in the abstract for district agreements. Is it not significant that while the miners' leaders are demanding a national agreement, the Engineering Unions eagerly desire to pull down their national agreement and substitute district settle- ments ? They base themselves on the very human argument that a national agreement makes the speed of the whole battalion the speed of the slowest marcher. Wages in prosperous districts are held back by wages in the depressed districts. The miners who are breaking away from Mr. Cook and Mr. Smith seem to be thinking in much the same way. Many miners are also apparently wondering whether an immutable refusal of any increase of hours is really satisfactory. Eight hours in a well- ventilated, electrically-lit mine may be as endurable as a day's work in a London tube railway, whereas in a hot, damp pit seven hours may be more than most men could endure.

Again, a national agreement, as some of the men are beginning to say, acts more in favour of the companies than in favour of the men. Under a national arrange. ment the owners are relieved of part of their dread of strikes. If under district settlements owners did not satisfy their men the result of a strike in a particular district would be that business would go to rival districts, but under a national agreement the owners have no fears of their rivals at home. A strike throughout the mines paralyses all alike and is generally less likely to last long than a detached strike in a district. From yet another point of view, a national agreement may be thought dangerous because of the tendency to convert a strike against one employer into an attack on the public, in which the employer stands by, worried of course, but not bearing the brunt of a direct attack.

Although we deeply regret the obscurity which seems to be closing round the Report, we hope that good may come out of evil, if the soldiers' battle which is now going on culminates in a general sense that after all employers and employed have got to agree and work together if the industries of the country are to be saved. If that conviction be reached the most important goal of all will have been gained.

There must be no cries of victory, no malicious penalties. If the owners think that they are in a stronger position than before that will be the time to show that they can also be just and generous. If the men are bitter under the realization that their trade union treasuries are empty, and that it is after all impossible to draw out of an industry more than that industry is economically able to pay, then will be the time for them to understand —what they have refused to believe in all these sorry years—that constructive co-operation is the only way of salvation. There will then be hopes for putting into effect the one principle that can- open up a new and better industrial era, the principle that men should work not `-` for" an employer but " with " him.