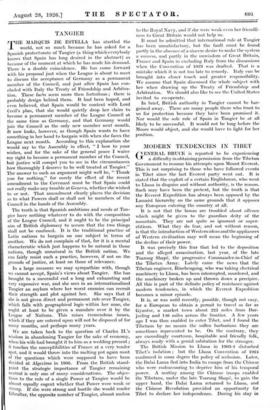 THE MARQUIS DE ESTELLA has startled the world, not so much because he has asked for a Spanish protectorate of Tangier (a thing which everybody knows that Spain has long desired in the abstract) as because of the moment at which he has made his demand.

There is a double coincidence. He has come forward with his proposal just when the League is about to meet to discuss the acceptance of Germany as a permanent member of the Council, and just after Spain has con- cluded with Italy the Treaty of Friendship and Arbitra- tion. These facts seem more then fortuitous ; there is probably design behind them. It had been hoped, and even believed, that Spain would be content with Lord Cecil's plan, that she would quietly drop her claim to become a permanent member of the League Council at the same time as Germany, and that Germany would join the Council as the only new member next month. It now looks, however, as though Spain wants to have something in her hand to bargain with when she faces the League next month. According to this explanation she would say to the Assembly in effect, " I bow to your wishes, and for the sake of the general peace I waive my right to become a permanent member of the Council, but justice will compel you to see in the circumstances how thoroughly I deserve to be well treated at Tangier." The answer to such an argument might well be, " Thank you for nothing," for surely the effect of the recent amendment to the Covenant must be that Spain could not really make any trouble at Geneva, whether she wished to or not. That amendment clearly places the decision as to what Powers shall or shall not be members of the Council in the hands of the Assembly..

The truth is that Spanish ambitions and needs at Tan- gier have nothing whatever to do with the composition of the League Council, and it ought to be the principal aim of British diplomacy to secure that the two things shall not be confused. It is the traditional practice of Latin nations to bargain on one subject in " terms of another. We do not complain of that, for it is a mental characteristic which just happens to be natural in those nations, though unnatural in the British nation. We can fairly resist such a practice, however, if not on the grounds of justice, at least on those of relevance.

In a large measure we may sympathize with, though we cannot accept, Spain's views about Tangier. She has brought to a successful end a long and exhausting and very expensive war, and she sees in an internationalized Tangier an asylum where her worst enemies can recruit their strength and plot against her. She says that if she is not given direct and permanent rule over Tangier, which falls with geographical logic within her zone, she ought at least to be given a mandate over it by the League of Nations. This raises tremendous issues, which if they are entered upon will not be disposed of for many months, and perhaps many years.

We are taken back to the question of Charles II.'s wisdom in abandoning Tangier for the sake of economy, when his wife had brought it to him as a wedding present ; it touches the susceptibilities of France at a very tender spot, and it would throw into the melting pot again most of the questions which were supposed to have been decided at Algeciras in 1906. From the British stand- Point the strategic importance of Tangier remaining neutral is only one of many considerations. The objec- tions to the rule of a single Power at Tangier would be almost equally cogent whether that Power were weak or strong. If she were strong and hostile she would render Gibraltar, the opposite number of Tangier, almost useless to the Royal Navy, and if she were weak even her friendli. ness to Great Britain would not help us.

It must be admitted that international rule at Tangier has been unsatisfactory, but the fault must be found partly in the absence of a sincere desire to make the system a success, and partly in the unwisdom of Great Britain, France and Spain in excluding Italy from the discussions when the Convention of 1923 was drafted. That is a mistake which it is not too late to remedy. Italy can be brought into closer touch and greater responsibility. We assume that Spain discussed the whole subject with her when drawing up the Treaty of Friendship and Arbitration. We should also like to see the United States invited to co-operate.

In brief, British authority in Tangier cannot be bar- gained away. There are many people there who trust to us for protection because they have been promised it. Nor would the sole rule of Spain in Tangier be at all likely to be successful. It would not be long before the Moors would object, and she would have to fight for her position.