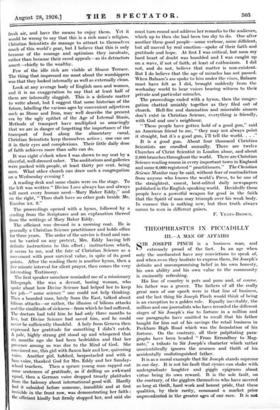 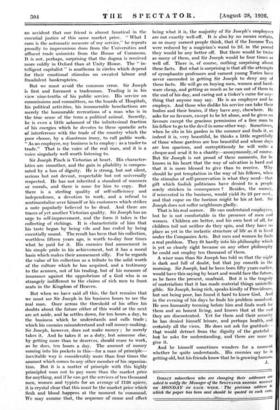 of the fact. In an age when only the uneducated have any convictions to speak of, and when even they hesitate to express them, Sir Joseph's definite and uncompromising belief in his own honesty, his own ability and his own value to the community is eminently refreshing.

His line of country is pots and pans and, of course, his father was a grocer. The fathers of all the really great men of our epoch were in that line of business, and the last thing Sir Joseph Pinch would think of being is an exception to a golden rule. Equally inevitably, the million and one journalists who have recorded the different stages of Sir Joseph's rise to fortune in a million and one paragraphs have omitted to recall that his father bought for him out of his savings the retail business in Peckham High Road which was the foundation of his fortune. On the contrary, all their palpitating para- graphs have been headed " From Errand boy to Mag- nate," a tribute to Sir Joseph's character which rather unscientifically ignores the acumen and thrift of his accidentally undistinguished father.

It is as a moral example that Sir Joseph stands supreme in our day. It is not his fault that cynics can shake with undergraduate laughter and giggle epigrams about virtue being its own reward. It is the sole fault, on the contrary, of the gigglers themselves who have sneered so long at thrift, hard work and honest pride, that these qualities, by their rarity, command a market price unprecedented in' the greater ages of our race. It is not an accident that our friend is almost fanatical in the essential justice of this same market price. " What I earn is the automatic measure of my service," he repeats proudly to impecunious dons from the Universities and affluent trade unionists from the House of Commons. It is not, perhaps, surprising that the dogma is-received more coldly in Oxford than at Unity House. The " in- telligent capitalist " is anathema in circles which depend for their emotional stimulus on sweated labour and fraudulent bankruptcies.

But we must avoid the common error. Sir Joseph is first and foremost a tradesman. Trading is in his view nine-tenths of his public service. His service on commissions and committees, on the boards of Hospitals, his political activities, his innumerable benefactions are merely the honourable recreations of a man who is in the true sense of the term a political animal. Secretly, he is even a little ashamed of the infinitesimal fraction of his energies which he devotes to these sporadic acts of interference with the trade of the country which the poor choose, by a disastrous irony, to call public work. " As an employer, my business is to employ : as a trader to trade." That is the voice of the real man, and it is a voice singularly well worth listening to.

Sir Joseph Pinch is Victorian at heart. His character- istics are smoother, and the gain in pliability is compen- sated by a loss of dignity. He is strong, but not silent, serious but not devout, respectable but not universally respected. He has not inherited a standard of manners or morals, and there is none for him to copy. But there is a sterling quality of self-sufficiency and independence, a devotion to work, and a refusal to sentimentalize over himself or his customers which strikes a note popularly believed to be dead. And there are traces of yet another Victorian quality. Sir Joseph has an urge to self-improvement, and the form it takes is the collecting of etchings. It is characteristic of him that his taste began by being vile and has ended by being essentially sound. The.result has been that his collection, worthless fifteen years ago, is worth to-day four times what he paid for it. His enemies find amusement in his simple pride in his achievement, but it has a moral basis which makes their amusement silly. For he regards the value of his collection as a tribute to the solid worth of the culture which he has acquired, and a testimony to the acumen, not of his trading, but of his measure of insurance against the opprobrium of a God who is so strangely indifferent to the claims of rich men to front seats in the Kingdom of Heaven.

But when we have said all this, the fact remains that we must see Sir Joseph in his business hours to see the real man. Once across the threshold of his office his doubts about the future either of this world or the next are set aside, and he settles down, for ten hours a day, to the business which he understands and calls trade ; which his enemies misunderstand and call money-making. Sir Joseph, however, does not make money ; he merely takes it. And he takes it as a duty, lest someone else, by getting more than he deserves, should cease to work, as he does, ten hours a day. The amount of money coming into his pockets in this—for a man of principle— inevitable way is considerably more than four times the amount which comes to any other member of his organiza- tion. But it is a matter of principle with this highly principled man not to pay more than the market price for anything, and if he can get the services of ten thousand men, women and typists for an average of £120 apiece, it is crystal clear that this must be the marketprice which flesh and blood happens at the Moment to command. We may assume that, the sequence of- cause and effect -being what it is, The majority of Sir Joseph's employees are not exactly well-off. It is also by no means certain, as so many earnest people think, that if the Income tax Were reduced by a magician's wand to 2d. in the pound they would be any better off. But there would be twice as many of them, and Sir Joseph would be four times as well off. There is, of course, nothing surprising about these facts. But what is surprising is that all the attempts of sycophantic professors and earnest young. Tories have never succeeded in getting Sir Joseph to deny any of these facts. He will go on buying men, women and hard- ware cheap, and getting as much as he can out of them to the end of his day, and caring not a tinker's curse for any- thing that anyone may say. He is an employer and he employs. And those who dislike his service can take their bodies and their brains, if they have any, elsewhere. He asks for no favours, except to be let alone, and he gives no favours except the gracious permission of a free man to his fellow to go to the devil in some other way. Sometimes, when he sits in his garden in the summer and finds it, as indeed it is, very beautiful, he thinks a little regretfully of those whose gardens are less beautiful and whose days are less spacious, and surreptitiously_ he will write a cheque and send it to a charity—anonymously, of course. But Sir Joseph is not proud of these moments, for he knows in his heart that the way of salvation is hard and that it is more blessed to give than to receive. Why should he put temptation in the way of his fellows, when the stimulus of self-preservation is what they need7-that gift which foolish politicians have denied to a people sorely stricken in consequence ? Besides, the money, if reinvested in the business, would yield its 25 per cent., and that copse on the horizon might be his at last. Sir Joseph does not suffer neighbours gladly.

That is his real sorrow. He can understand employees, but he is not comfortable in the presence of men and women. Children are better, and his own best of all, for children toil not neither do they spin, and they have no place as yet in the inelastic structure of life-as it is lived. under the Companies. Acts. But men and women he finds a real problem. They fit hardly into his philosophy which is yet so clearly right because on any other philosophy he could not employ ten thousand of them.

A wiser man than Sir Joseph has told us that the night is dark and full of doubt, but that joy cometh in the morning. Sir Joseph, had he been born fifty years earlier, would have this saying by heart and would face the future, as he faces the present, unafraid. But it is the tragedy of materialism that it has made material things unintelli- gible. Sir Joseph, being rich, speaks kindly of Providence, but not being poor, has found it hard to know God. And in the evening of his days lie finds his problem unsolved. He sees humanity teeming before him and finds work for them and an honest living, and knows that at the end they are. discontented. Yet for theM and their .security he. has denied himself leisure, and perhaps health, and certainly all the vices. He 'does not ask for gratitude- thkr,t would detract from the dignity of the grateful— b4 he asks for understanding, and there are none to give it.

And he himself sometimes wonders for a moment whether he quite understands. His enemies say he is getting old, but his friends know that he is growing human. J.