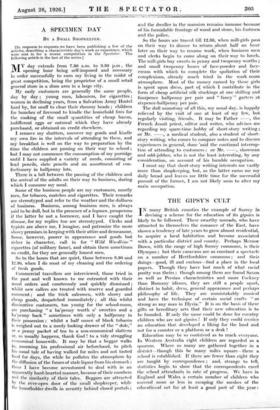 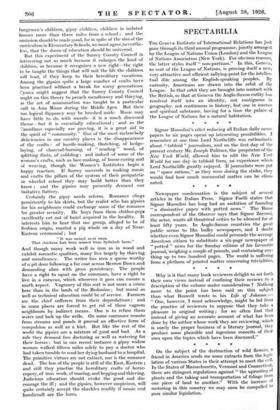 IN many British counties the example of Surrey in devising a scheme for the education of its gipsies is likely to be followed. These swarthy nomads, who have attracted to themselves the romance of the East, have shown a tendency of late years to grow almost residential, to acquire a local habitation and become associated with a particular district and county. Perhaps Merrow Down, with the range of high Surrey commons, is their Olympus ; but their caravans are as constant a spectacle on a number of Hertfordshire commons ; and their doings—good, ill and curious—find a place in the local papers. Though they have lost much of what racial purity was theirs ; though among them are found Saxon as well as Persian characteristics and more Cockney than Romany idioms, they are still a people apart, distinct in habit, dress, general appearance and perhaps philosophy of life. They are unmistakably musical and have the technique of certain social crafts " as strong as any man in Illyria." It is on the basis of these gifts, or hereditary arts that their new education is to be founded. If only. the same could be done for country children who are not gipsies ! If only they could receive an education that developed a liking for the land and hot for a counter or a platform or a desk !

Education may he so contrived as to reach everyone. In Western Australia eight children are regarded as a quorum. Where so many are gathered together in a district—though this be many miles square—there a school is established. If there are fewer than .eight they arc taught by correspondence ; and, strange to tell, statistics begin .to show that the correspondents excel the school _attendants in rate of progress. We have in England . and. Wales a certain number of children who succeed more or less in escaping. the meshes of the educational net for at least a good part of_ the year bargemen's children, gipsy children, children in isolated houses more than three miles from a school ; and the omission should be made good, for in spite of the sins of the curriculum in Elementary Schools, we must agree, neverthe- less, that the doom of education should be universal.

But this experiment of the Surrey County Council is interesting not so much because it enlarges the haul of children, as because it recognizes a new right—the right to be taught the things that will suit the life the children will lead, if they keep to their hereditary vocations. Among the gipsies quite a large number of crafts have been practised without a break for many generations. Cynics might suggest that the Surrey County Council ought on this theory to preach mendicancy and thieying, as the art of assassination was taught to a particular cult in Asia Minor during the Middle Ages. But their too logical flippancy may be brushed aside. Music may have little to do with morals—it is a much discussed theme—but it is essentially educational ; and as the Canadians especially are proving, it is a great aid to the spirit of " community." One of the most melancholy deficiencies in our country places is the disappearance of the crafts : of hurdle-making, thatching, of hedge- laying, of charcoal-burning, of " rending " wood, of splitting flints, of cobbling ; and indeed of some of the woman's crafts, such as lace-making, of home-curing and of weaving, though the Women's Institutes begin a happy reaction. If Surrey succeeds in making music and crafts the pillars of the system of their peripatetic or wheeled school they may build better than they know ; and the gipsies may presently demand our imitative flattery.

Certainly the gipsy needs reform. Romance clings persistently to his skirts, but the realist who has gipsies for his neighbours could exchange some of the romance for greater security. He buys from them clothes-pegs excellently cut out of hazel acquired in the locality. It interests him. to hear that one group, alleged to be of Serbian origin, roasted a pig whole on a day of Near- Eastern ceremonial ; but " It was noised next noon

That chickens had been missed from Syllabub farm."

And though many work well in iron as in wood and exhibit romantic qualities, many live largely by thieving and mendicancy. The writer has seen a queue worthy of a pit door following a fur coat across Merrow Down and demanding alms with gross persistency. The people have a right to squat on the commons, have a right to live in a caravan, which wherever it goes can ensure a south aspect. Vagrancy of this sort is not more a crime here than in the lands of the Bedouins ; but moral as well as technical education could be of service. Farmers are the chief sufferers from their depredations ; and in some places are forced to get rid of these vagrom neighbours by indirect means. One is to refuse them water and lock up the wells. On some commons remote from streams and ponds it proved an effective form of compulsion as well as a hint. But like the rest of the world the gipsies are a mixture of good and bad. As a rule they demand free doctoring as well as watering for their horses ; but in one recent instance a gipsy widow woman walked fifteen miles solely to pay a doctor who had taken trouble to send her dying husband to a hospital. The primitive virtues are not extinct, nor is the romance dead. The hue of the people is still of the East, Eastern ; and still they practise the hereditary crafts of horse- copery, of iron work, of snaring, and begging and thieving. Judicious education should evoke the good and dis- courage the ill ; and the gipsies, however suspicious, will quite Certainly accept the shackles readily if music and handicraft are the lures.