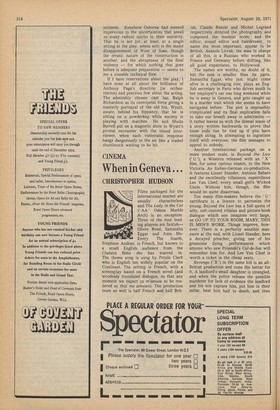 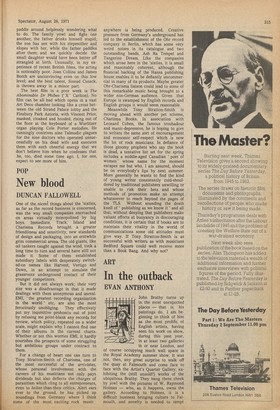 Films packaged for the international market are usually characterless and The Lady in the Car (' AA ' Odeon Marble Arch) is no exception. Three of the four leading players are British— Oliver Reed, Samantha Eggar and John McEnery. The fourth, Stephane Audran, is French, but known to a small English audience from the Chabrol films she has starred in. The theme song is sung by Petula Clark who is English but widely popular on the Continent. The setting is French, with a screenplay based on a French novel (and woodenly translated dialogue, so that any moment we expect ca m'amuse to be rendered as that me amuses). The production team as well is half French and half Brit ish. Claude Renoir and Michel Legrand respectively directed the photography and composed the musical score; and the editor, sound editor and hairdresser, to name the most important, appear to be British. Anatole Litvak, the man in charge of all this, is a Russian who worked in France and Germany before drifting, like all good expatriates, to Hollywood.

The names are worthy, no doubt of it, but the sum is smaller than its parts. Samantha Eggar, who just might come alive in a challenging role, plays an English secretary in Paris who drives south in her employer's car one long weekend while he is away in Geneva, and gets caught up in a murder trail which she seems to have navigated before. The plot is impossibly complicated and its final explication fails to take our breath away in admiration — it rather leaves us with the dismal sense of a story written backwards to prove that loose ends can be tied up if you have enough string. In attempting to ingratiate itself with everyone, the film manages to appeal to nobody.

Another international package, on a more modest scale, is Beyond the Law ('U '), a Western released with an ' X' film, for some curious reason, to the New Victoria. An Italian-German co-production, it features Lionel Stander, Antonio Sabato and the excellently villainous, supercilious Lee Van Cleef, every small girl's Wicked Uncle. Without him, though, the film would be quite disastrous.

Too many film-makers believe the ' U ' certificate is a licence to patronize the young. Beyond the Law has a full quota of silly, soft-centred villains and picture-book dialogue which one imagines writ large, as GO UP TO YOUR ROOM, MARY, THIS IS MEN'S WORK. Things improve, however. There is a perfectly sensible massacre at the end, with Lionel Stander, here a decayed preacher, giving one of his gruesome dying performances which anyone who saw Polanski's Cul-de-Sac will remember him for. And Lee Van Cleef is worth a ticket in the cheap seats.

Revenge (' X ') in the same bill is an allBritish production and none the better for it. A landlord's small daughter is strangled, and when the police release the possible murderer for lack of evidence the landlord and his son capture him, put him in their cellar, beat him half to death, and then paddle around helplessly wondering what to do. The family yowl and fight one another; the father drinks himself stupid; the son has sex with his stepmother and elopes with her, while the father paddles after them; and we quickly decide the small daughter would have been better off strangled at birth. Unusually, in my experience of recent British films, the acting is noticeably poor. Joan Collins and James Booth are unconvincing even on this low level; and the best talent, Sinead Cusack, is thrown away in a minor part.

The best film in a poor week is The Abominable Dr Phibes (' X ' Carlton). No film can be all bad which opens in a vast Art Deco chamber looking like a cross between the old Strand Palace lobby and the Finsbury Park Astoria, with Vincent Price, masked, cloaked and hooded, rising out of the floor at the keyboard of a Wurlitzer organ playing Cole Porter melodies. He cunningly contrives nine Talmudic plagues for the nine doctors who operated unsuccessfully on his dead wife and executes them with such cheerful energy that we don't believe him when he confesses that he, too, died some time ago. I, for one, expect to see more of him.