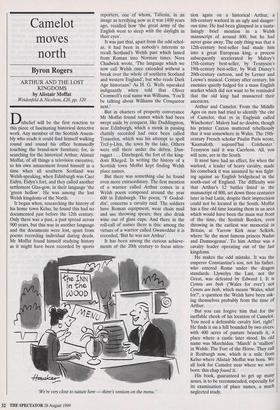 ARTHUR AND THE LOST KINGDOMS by Alistair Moffat Weidenfeld & Nicolson, £20, pp. 320 Disbelief will be the first reaction to this piece of fascinating historical detective work. Any member of the Scottish Assem- bly who reads it could find himself walking round and round his office bemusedly touching the brand-new furniture; for, in searching for the historical Arthur, Alistair Moffat, of all things a television executive, to his own amazement found himself in a time when all southern Scotland was Welsh-speaking, when Edinburgh was Caer Eidyn, Eidyn's fort, and they called another settlement Glas-gow, in their language 'the `green hollow'. He was among the lost Welsh kingdoms of the North.

It began when, researching the history of his home town Kelso, he found this had no documented past before the 12th century. Only there was a past, a past spread across 900 years, but this was in another language and the documents were lost, apart from poems recording individual daring deeds. Mr Moffat found himself studying history as it might have been recorded by sports reporters, one of whom, Taliesin, in an image as terrifying now as it was 1400 years ago, recalled how 'the great army of the English went to sleep with the daylight in their eyes'.

It was just that, apart from the odd schol- ar, it had been in nobody's interests to recall Scotland's Welsh past which lasted from Roman into Norman times. Nora Chadwick wrote, 'The language which we now call Welsh once extended without a break over the whole of southern Scotland and western England', but who reads Dark Age historians? As H. G. Wells squeaked indignantly when told that Oliver Cromwell's real name was Williams, 'You'll be talking about Williams the Conqueror next.'

But in charters of property conveyance Mr Moffat found names which had been swept aside by conquest, like Duddingston, near Edinburgh, which a monk in passing chattily recorded had once been called Trauerlen, which was his attempt to spell Tref-y-Llyn, the town by the lake. Others were still there under the debris. Dun- ragget . . . Dinrheged, the fort of the king- dom Rheged. In writing the history of a Scottish town Moffat kept finding Welsh place names.

But there was something else he found even more extraordinary. The first mention of a warrior called Arthur comes in a Welsh poem composed around the year 600 in Edinburgh. The poem, 'Y Godod- din', concerns a cavalry raid. The soldiers have Roman equipment, wear chain mail and use throwing spears; they also drink wine out of glass cups. And there in the roll-call of names there is this: among the virtues of a warrior called Gwawrddur it is recorded, `But he was not Arthur'.

It has been among the curious achieve- ments of the 20th century to focus atten- tion again on a historical Arthur, a 6th-century warlord in an ugly and danger- ous time. He had been glimpsed in a tanta- lisingly brief mention in a Welsh manuscript of around 800, but he had never gone away. The only thing was that a 12th-century best-seller had made him into a great European king, a process subsequently accelerated by Malory's 15th-century best-seller, by Tennyson's 19th-century best-seller, by Walt Disney's 20th-century cartoon, and by Lerner and Loewe's musical. Century after century, his enemies quietly fudged for a mass English market which did not want to be reminded that the old king had massacred their ancestors.

Arthur and Camelot. From the Middle Ages on men had tried to identify `the cite of Camelot, that ys in Englyssh called Winchester'. Malory had no doubts, though his printer Caxton muttered rebelliously that it was somewhere in Wales. The 19th- century French scholar Paulin Paris wrote, `Kaamaloth, aujourd'hui Colchester.' Tennyson said it was Caerleon. All, you will note, are in the South.

It must have had an effect, for when the warlord, a leader of heavy cavalry, made his comeback it was assumed he was fight- ing against an English bridgehead in the south-east of England. The difficulty was that Arthur's 12 battles listed in the manuscript of 800, set down three centuries later in bad Latin, despite their imprecision could not be located in the South. Moffat has a fine old time locating them in an area which would have been the main war front of the time, the Scottish Borders, even throwing in the earliest war memorial in Britain, at Yarrow Kirk near Selkirk, where `lie the most famous princes Nudus and Dumnogenus'. To him Arthur was a cavalry leader operating out of the last kingdoms.

He makes the odd mistake. It was the emperor Constantine's son, not his father, who entered Rome under the dragon standards. Llywelyn the Last, not the Great, was defeated by Edward I. It is Cymru am byth Males for ever') not Cymru am beth, which means `Wales, what for?', a question the Welsh have been ask- ing themselves probably from the time of Arthur.

But you can forgive him that for the ineffable cheek of his location of Camelot. You need a defensible cavalry fort, right? He finds it on a hill bounded by two rivers, with 400 acres of pasture beneath it, a place where a castle later stood. Its old name was Marchidun. `March' is `stallion' in Welsh: The Fort of the Horse. They call it Roxburgh now, which is a mile from Kelso where Alistair Moffat was born. We all look for Camelot near where we were born: this chap found it.

His book, guaranteed to get up many noses, is to be recommended, especially for its examination of place names, a much neglected study.