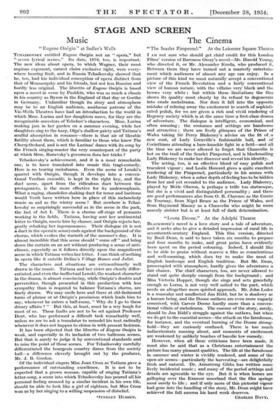 "Lorna Doone." At the Adelphi Theatre BLACKMORE'S novel is a

love story and a tale of adventure, and it seeks also to give a detailed impression of rural life in seventeenth-century England. This film version, directed by Basil Dean, is said to have taken six months to prepare and four months to make, and great pains have evidently been spent on the period colouring. Indeed, I should like to be able to praise without reserve a film so conscientious and well-meaning, which does try to make the most of English landscape and English tradition. But Mr. Dean, preoccupied with atmosphere, hardly gives the adventures a fair chance. The chief characters, too, are never allowed to stand out quite sharply enough from the background ; and Miss Victoria Hopper, though she sings and acts gracefully enough as Lorna, is not very well suited to the part, which needs an altogether more spirited approach. Mr. John Loder is a muscular and unaffected Jan Ridd, but he is shadowy as a human being, and the Doone outlaws are even more vaguely conceived, with Carver Doone hardly more than a conven- tional villain of melodrama. The essence of the story, surely, should be Jan Ridd's struggle against the outlaws, but when we do get to the essential scenes—the attack on the farmhouse, for instance, and the eventual burning of the Doone strong. hold—they are curiously confused. There is too much indiscriminate running about, and moments of excitement are weakened by unlikely touches of bucolic low comedy.

However, when all these criticisms have been made, it must also be said that as a Christmas entertainment the picture has many pleasant qualities. The life at the farmhouse in summer and winter is vividly rendered, and some of the open-air scenes—particularly the harvesting—are delightfully fresh and natural. Dr. Armstrong Gibbs has written some lively incidental music ; and many of the period settings and details are agreeable to the eye. But it is when horses are galloping over the Exmoor moorland that the film springs most surely to life ; and if only more of this pictorial vigour had gone into the handling of the story, Mr. Dean might have achieved the full success his hard work deserves.