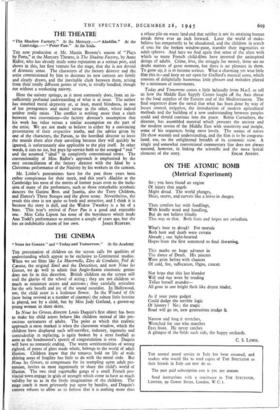 "The Shadow Factory." At the Mercury.—" Aladdin." At the Cambridge.—" Peter Pan." At the Scala.

THE new production at Mr. Martin Browne's season of " Plays by Poets," at the Mercury Theatre, is The Shadow Factory, by Anne Ridler, who has already made some reputation as a serious poet, and shows in this, her first venture for the stage, that she is not devoid of dramatic sense. The characters of the factory director and the artist commissioned by him to decorate its new canteen are firmly and clearly drawn, and the inevitable clash between them, arising from their totally different points of view, is vividly handled, though not without a weakening naivety.

Here the naivety springs, as it most commonly does, from an in- sufficiently profound understanding of what is at issue. The author has assumed moral depravity or, at least, moral blindness, in one of her protagonists and moral virtue in the other, where indeed neither really exists. The conflict is nothing more than a clash between two conventions—the factory director's assumption that his work has value versus a similar assumption on the part of the artist. We are not made to believe in either by a convincing presentation of their respective truths, and the advice given by one of the characters, the Parson, to the horrified director to leave the murals there after their unveiling because they will quickly be ignored, is unfortunately also applicable to the play itself. In other words, it cuts no ice, but pays lip-service both to the assured " real " and the assumed " ideal " in completely conventional terms. The conventionality of Miss Ridler's approach is emphasised by the easy reconciliation of the factory director with the Ideal by a Christmas performance of the Nativity by his workers in the canteen.

Mr. Littler's pantomimes have for the past three years been rather conspicuous for their merit, and this year's Aladdin at the Cambridge has most of the merits of former years even to the inclu- sion of many of the performers, such as those remarkable acrobatic dancers the Ganjou Bros. and Juanita, also the Terry Children, and Elstree's Three Stooges and the ghost scene. Nevertheless, the result this time is not quite so fresh and attractive, and I think it is because the story is dull, and the Widow Twankey is a bit of a bore. This year's revival of Peter Pan is a good and enjoyable one. Miss Celia Lipton has none of the boyishness which made Ann Todd's performance so attractive a couple of years ago, but she

has an indubitable charm of her own. JAMES REDFERN.