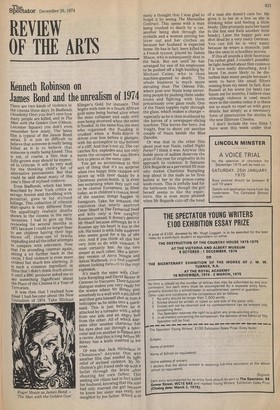 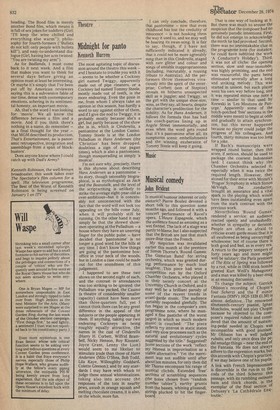 Kenneth Robinson on James Bond and the unrealism of 1974

There are two kinds of violence in the cinema these days. In Badlands

(Academy One) you don't care how

many people are killed, and in The Man with the Golden Gun (Odeon,

Leicester Square) you don't even

remember how many. The latter film is typical of the James Bond series. It is just as difficult to believe that someone is really being

killed as it is to believe that someone is really being kissed. This IS not, of course, a film that a fully-grown man should be expected to criticise. It will do very well for the thinking child's list of alternative pantomimes. But that could be said about many of this year's films of stylised violence.

Even Badlands, which has been described by New York critics as savage, honest and throbbing with Potential, goes in for stylised killings. This collection of crimson shirt-spurts is very different from the appallingly realistic deaths Shown in the cinema in the early seventies. I had to give up film reviewing for several months in 1971 because I could no longer bear to see children having their legs blown off, close-ups of brains exploding and all the other attempts to compete with television. Now that I'm attending cinemas again, sitting a lot further back in the circle, I find violence is even more evident but much less alarming. It IS such a common ingredient in films that I didn't think much about it until a BBC producer asked me to say something Significant about the Place of the Cinema in a Year of Terrorism.

It was then that I realised how blasé I had become about the New Unrealism of 1974. Take Michael

Klinger's Gold, for instance. This begins with men in a South African gold mine being buried alive when the mine collapses and ends with men being drowned when the mine is flooded. In the same film the man who organised the flooding is crushed when a Rolls-Royce is driven over him before it plunges, with his accomplice to the bottom of a cliff. And that's not all. The car catches fire, explodes and not only burns the occupant but also blows him to pieces at the same time.

You get so accustomed to this

sort of thing that it's no surprise when two happy little children are blown up with their daddy by a Christmas parcel-bomb. It is even less surprising when they turn out to be central Europeans. In films today, as in children's comics, most of the nastiest things happen to foreigners. Take, for instance, the explosion that nearly destroys Omar Sharif in The Tamarind Seed and kills only a few naughty Russians instead. It doesn't destroy Mr Sharif because although he is a Russian spy his heart is not in the job. His heart is with Julie Andrews who seems good for a bit of idle vice. And if you think all this has very little to do with violence, it most certainly has. As the two simper at each other, like a latterday version of Anna Nea

g. le and Anton Walbrook, y(qi find Yourself almost looking forw"rd to the next explosion.

Caravan to Vacca res. Their fatuous dialogue makes you very ready for the scenes where Mr Birney pins somebody to a wall with a Pitchfork and then gets himself shot at from a helicopter as he sinks into a

sand. This is just before

attacked by a toreador with a whip from one side and an angry bull from the other. All of which happens after another character has his eyes shot out through a binocular and yet another is flipped into a ravine. And this is long before Mr Birney has a knife inserted in his nose.

Or was that Jack Nicholson in

Chinatown? Anyway that was another film that needed its light relief of stylised violence. Mr Ni_ cholson's girl friend ends up with a bullet through the brain

shooting her own father. This smiling old villain had in fact killed her husband, knowing that the man had only married the girl because he knew her sister was really her daughter by her father. Which is so nasty a thought that I was glad to forget it by seeing The Marseilles Contract. This opens with a man being crushed to death by a car, another being shot through the eyeballs and a woman putting her lover out and her clothes on because her husband is expected home. He has in fact, been killed by a French tycoon, played by James , Mason, who is subsequently shot in the back. But not until he has arranged for one of his employees to be pushed off a high building by Michael Caine, who is then machine-gunned to death. The whole business is much more elevating than The Odessa File, where post-war Nazis keep terrorising people by pushing them under trains and fighting with them precariously over glass roofs. One of the Nazis topples right through the glass, which makes a change — especially as he is then mutilated by the knives of a newspaper-slicing machine. This leaves the hero, Jon Voight, free to shoot yet another couple of Nazis beside the Blue Danube.

Or was that in the other film about post-war Nazis, called Night Porter? I think it was. Anyway this

feeble piece of sadism deserves the prize of the year for originality in its approach to violence. It features Dirk Bogarde as a perverted SS man who makes Charlotte Rampling leap about in the nude as he fires bullets at her in the prison-camp wash-room. This is awfully bad for the bathroom tiles, though the girl herself seems to like the experience. She is even more pleased when Mr Bogarde cuts off the head of a man she doesn't care for. He gives it to her in a box as she is drinking wine and feeling a little heady. (She promptly puts her hand in the box and feels another little heady). Later the happy pair are shot dead by a very nasty German. You can tell he is very nasty because he wears a monocle, just like the ones in schoolboy stories.

If this all sounds a little facetious I'm rather glad, I couldn't possibly be light-hearted about film violence if it were really disturbing. And I know I'm more likely to be disturbed than many people because I seem to have the usual filters missing from my mind. In fact, Ken Russell at his worst (or best) can haunt me for months. I believe that although violence is used much more in the cinema today it is there not so much to repel us with gory details, but simply as a necessary form of punctuation for stories in the new Illiterate Cinema.

I don't include the two films I have seen this week under that heading. The Bond film is merely another Bond film, which means it is full of sex jokes for toddlers (Girl: "I'll keep the wine chilled and everything else warm"); philosophy for fourth-formers ("Bullets do not kill: only people with bullets kill"), and easy-to-understand dialogue (Girl, having her arm twisted: "You are twisting my arm").

As for Badlands, I must come back to it next week. And a film that makes you want to think for several days before giving an opinion must at least be interesting. Or maybe it's simply that I've been put off by American reviewers saying this is a subversive fable of our time, dense with contemporary emotions, sobering in its sentimental honesty, an important movie.

Ah, that's the word I was looking for: 'movie'. We all know the difference between a film and a movie. And if you think there's nothing in a name, do remember — as a final thought for the year — that MGM described its production, That's Entertainment, as 'a panoramic retrospective, integration and assemblage from a span of blockbusters'.

Does anyone know where I could catch up with Dad's Army?

Kenneth Robinson, the well-known broadcaster, this week takes over The Spectator's film column for a spell. His television programme, The Best of the Worst of Kenneth Robinson is being screened on January / on ITV