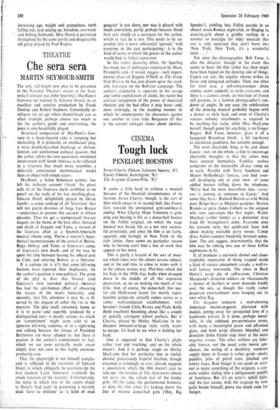 Sweet Charity (Odeon, Leicester Square, 'A') Candy (Odeon, Kensington, 'X') The Sergeant (Cameo-Poly, 'X') It seems a little hard to criticise a musical because of the financial circumstances of its heroine. Sweet Charity, though, is the sort of film which sways in its second half, like Funny Girl, towards the unrequited, grin-and-bear-it ending. What Charity Hope Valentine is grin- ning and bearing is life as a dance-hall hostess (in the Fellini original, on which the stage musical was based, life as a not very success- ful prostitute); and since the film is set fairly, squarely and lovingly in New York of the rich 'sixties, there seems no particular reason why its heroine can't find a line of work that appeals to her more.

This is partly a hazard of the sort of musi- cal which takes over the almost serious subject, and in the end tries to cdme to terms with it in the almost serious way. Plot-lines which did for Italy in the 1950s fray badly when dropped down in the middle of all this expensive decoration, so set on making too much of too little. And, of course, the dance-hall, that use- ful old Hollywood haunt for mistily repre- hensible goings-on, actually comes across as a rather well-conducted establishment, with heroine's friends Chita Rivera and Paula Kelly (both excellent) bounding about like a couple of genially astringent school prefects. But if Charity, played by Shirley MacLaine in her sharpest innocent-at-large style, really wants to escape, it's hard to see what is bolding her back.

One is supposed to find Charity's plight rather true and touching; and on the whole doesn't. And it is perhaps tough on Shirley MacLaine that her particular line in rueful, shrewd, precariously hopeful fatalism, though executed as winningly as ever, already suggests a speculation which the film doesn't care to take up: the heroine of The Apartment almost ten years on, the valiant last of the kooky girls. All the same, the performance bounces, as does the film when it's looking down the line of morose dance-hall girls ('Hey, Big

Spender'), ambling into Fellini parody in an absurd mock-Roman night-club, or flinging its dancing-girls about a grubby rooftop in a number so nostalgic for older musicals that one is only surprised they don't burst into 'New York, New York, it's a wonderful town . .

For once the choreographer, Bob Fosse, is also the director; though in the event this seems to buoy the film rather less than might have been hoped on the dancing side of things. Capers are cut; the angular chorus strikes its fierce and elongated attitudes. Then, too often for total ease, a self-consciousness about cinema seems suddenly to strike everyone, and there is a camera zoom, an interlude of frozen still pictures, or a fashion photographer's run- down of angles. In any case, the exhilaration of the dancing musical probably begins-with a dancer as male lead, and none of Charity's various unlucky attachments is required to be anything but static; while Miss Maclaine herself, though game for anything, is no Ginger Rogers. Bob Fosse, however, gives it all a lacquered Broadway finish: a bit top-heavy in Calculated gaudiness, but amiable enough.

The most charitable thing to be said about Candy—not, on the whole, a film to encourage charitable thoughts—is that 'the actors may have enjoyed themselves. Familiar restless symptoms of the inexorable all-star romp set in early. Parallel with Terry Southern and Mason Hoffenberg's fantasy, you find your- self developing one of your own: of some addled hostess trilling down the telephone, 'We've had the most marvellous idea—every- one is coming as someone in Candy.' And come they halve: Richard Burton as wild Welsh poet, Ringo Starr as Mexican gardener, Marlon Brando as guru, James Coburn as the surgeon who runs operations like first nights, Walter Matthau (rather funny) as a demented stray from Dr Strangelove's army. Everyone does his costume turn; less celebrated faces bob about making excitable party noises; Candy (Ewa Aulin) saunters Swedishly between seduc- tions. The sets suggest, intermittently, that the film may be sinking into one of those Fellini nightmares in 84.

It all produces a curiously dismal and claus- trophobic impression of being trapped inside a kind of rococo amusement arcade, a wall-to- wall fantasy non-world. The jokes in Buck Henry's script die of suffocation; Christian Marquand's direction soldiers on. Occasionally a shower of feathers or snow descends kindly over the sets, as though this realty rather desperate entertainment were hanging out its own white flag.

The Sergeant concerns a steel-chewing American master-sergeant, plastered with medals, pining away for unrequited love of ,a handsome private. It is done, perhaps merci- fully, in old, subdued, pre-permissive terms, with many a meaningful pause and affronted glare, and both script (Dennis Murphy) and direction (John Flynn) stop short at the more negative virtues. The other soldiers are toler- ably human, not the usual army movie ape- cbotos; the setting of a desultory, rundown supply depot in France is rather good—slushy puddles, piles of petrol cans, pinched and wintry faces. Rod Steiger is too good an actor not to make something of the sergeant, a con- crete soldier sliding into a deliquescent puddle of loneliness. But it's an actor's uphill fight; and the last scenes, with the sergeant by now quite beside himself, prove too much even for Steiger.