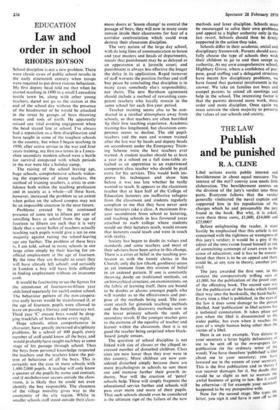 Law and order in school

School discipline is not a new problem. There were classic cases of public school revolts in the early nineteenth century when troops were required to put down riotous behaviour. My first deputy head told me that when he started teaching in 1890 in a small Lancashire textile town he, along with other young teachers, dared not go to the station at the end of the school day without the presence of the headmaster or he would be attacked in the street by groups of boys throwing stones and sods of earth. He apparently missed any vital evening engagement when the head stayed late at school. I've always had a reputation as a firm disciplinarian and have taught in some of the toughest schools in the country, but when I began teaching in 1950, after active service in the war and four years training, my first two terms in a Lanca- shire secondary modern school were a battle for survival compared with which periods in the war were like a holiday camp. '

The raising of the school leaving age, huge schools, comprehensive schools widen- ing the experience of many teachers, the method of training teachers, a crisis in con- fidence both within the teaching profession and in society as a whole—all these have, however, increased the problem to an extent when police on the school campus may not be an impossible situation in the near future.

Problems created by the continued presence of some ten to fifteen per cent of unwilling boys at school from the age of fourteen to fifteen are such that it is very likely that a secret ballot of teachers actually teaching such pupils would give a ten to one majority against raising the school-leaving age any further. The problem of these boys is, I am told, solved in many schools in our large cities simply by their leaving for un- official employment at the age of fourteen.

By the time they are brought to court they will have already left school; and certainly in London a boy will have little difficulty in finding employment without an insurance card.

It would be fascinating to see the figures for the attendance of fourteen-to-fifteen year olds listed separately for each London school.

The behaviour pattern of the non-coopera- tive early leaver would be transformed if, at the age of fourteen, pupils were allowed to leave on passing a literacy and numeracy test. Third year 'C' stream boys would be drag- ging truckfuls of books home every night.

Huge schools, often comprehensive in character, have greatly increased disciplinary problems. In a school of 400 pupils every member of staff could know all the boys, and would probably have taught each boy at some stage of his passage through school. Thus the boys from personal knowledge respected the teachers and the teachers knew the pat- tern of behaviour of all the boys. This is certainly not the case in most schools with 1,400-2,000 pupils. A teacher will only know a quarter of the pupils by name and contact; and if misbehaviour occurs outside the class- room, it is likely that he could not even identify the boy responsible. The closeness of the village morality gives way to the anonymity of the city region. Whilst in smaller schools staff stood outside their class- room doors at 'lesson change' to control the passage of boys, they will now in many cases remain inside their classrooms for fear of a corridor confrontation which could even destroy their classroom discipline.

The very n,ature of the large day school, with its long lines of communication to house and year masters and heads of departments,

means that punishment may be as delayed as an appearance at a juvenile court; and

punishment is always less effective the longer the delay in its application. Rapid turnover of staff worsens the position further and staff buy peace by concluding that discipline is in many cases somebody else's responsibility, not theirs. The new Burnham agreement should include a method of rewarding com- petent teachers who loyally remain in the same school for each five-year period.

Teacher training seems also to be con- ducted in a rarefied atmosphere away from schools, so that teachers are often horrified by their first teaching experience. Academic training-has lengthened, but classroom com- petence seems to decline. The old pupil- teachers and the men and women trained after the last war by heads and deputy heads on secondment under the Emergency Train- ing Scheme were the best teachers ever trained. A student teacher should be at least a year in a school on a full time-table at-

tached as an apprentice to an experienced competent class teacher who should be paid extra for his services. This would both im- prove his techniques and show him

before it was too late whether he really wanted to teach. It appears to the classroom teacher that at least half of the College of Education lecturers are ineffective refugees from the classroom and students regularly complain to me that they have never seen their lecturers take a class. A maximum five- year secondment from school to lecturing, and teaching schools in less favoured areas attached to each college where students would see their lecturers teach, would ensure that lecturers could teach and were in touch with reality.

Society has begun to doubt its values and standards and some teachers and most of their advisers have been active in this change.

There is a crisis of belief in the teaching pro- fession as with the trendy clerics in the Church; only the law (thank goodness) seems as yet immune from this erosion of belief in an ordered pattern. If one is constantly throwing doubt on traditional methods, on an hierarchical structure, on examinations, on the fabric of learning itself, there are bound to be doubts or alarms amongst pupils who will wonder as to the effectiveness and pur- pose of the methods being used. The con- stant search for gimmick teaching methods and the butterfly discovery methods sow in the lower primary schools the seeds of secondary revolt. If the younger teacher goes to the extreme of the equality of teacher and learner within the classroom, then it is no good the teacher being surprised when black- board jungle ensues.

The question of school discipline is not linked with size of classes or the alleged in- creased number of disturbed children. Class sizes are now lower than they ever were in this country. More children are now con- sidered disturbed simply because there are more psychologists in schools to sort them out and increase further their growth in- dustry. Nor will the creation of 'penal' schools help. These will simply fragment the educational service further and schools will pass over more and more of their pupils. That such schools should even be considered is the ultimate sign of the failure of the new methods and laxer discipline. Schools must be encouraged to solve their own problems and appeal to a higher authority only in the last resort. Schools should then be firmly supported in the action they take.

Schools differ in their academic, social and disciplinary framework. Parents should care. fully choose the type of schools they wish their children to go to and then accept its authority. At my own comprehensive school, Highbury Grove, where a confidence of pur- pose, good staffing and a delegated structure have meant few disciplinary problems, we have found that parental involvement is the answer. We take on families not boys and compel parents to attend all meetings and help in the schooL The interesting factor is that the parents demand more work, more order and more discipline. Once again we must activate the silent majority to preserve the values of our schools and society.