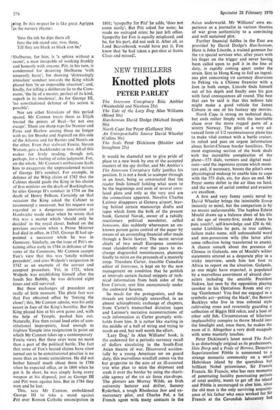 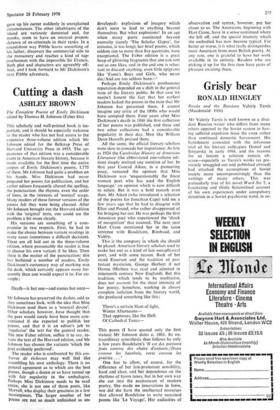 The Intercom Conspiracy Eric Ambler (Weidenfeld and Nicolson 25s) The Tale of the Lazy Dog Alan Williams (Blond 30s) Hatchetman David Dodge (Michael Joseph 30s) North Cape Joe Poyer (Gollancz 30s) An Unimpeachable Source David Wheeler (Collins 30s) The. Seals Peter Dickinson (Hodder and Stoughton 25s) It would be shameful not to give pride of place to a new book by one of the accepted masters of the spy thriller, and Mr Ambler's The Intercom Conspiracy fully justifies his position. It is not a book to scamper through in an hour, being so constructed that the reader finds himself holding what seem to be the beginnings and ends of several unre- lated plots and only at the very end are the connections apparent. Novelist Charles Latimer disappears at Geneva airport, leav- ing behind certain manuscript drafts and tapes which form the bulk of the present book. General Novak, owner of a rabidly reactionary political newsletter, called Intercom, dies suddenly whereupon an un- known person gains control of the paper by means of an astounding financial offer made through a Swiss lawyer. The secret service chiefs of two small European countries meet clandestinely over the years to ex- change disgruntled reminiscences, planning finally to retire on the proceeds of a masterly coup. Theodore Carter, irascible Canadian editor of Intercom, is kept on by the new management on condition that he publish at intervals certain factual snippets of tech- nical information from both sides of the Iron Curtain, sent him anonymously under the codeword Sesame.

So much for the protagonists, and the threads are tantalisingly unravelled, in an almost schizophrenic exchange of chapters, from Carter's transcribed dictation tapes and Latimer's narrative reconstructions of such information as Carter grumpily with- holds from him. It is rather like starting in the middle of a ball of string and trying to reach an end, but well worth the effort.

'Lazy Dog,' in Alan Williams' book, is the codeword for a periodic currency recall of dollars circulating in the South-East Asian theatre of war. Discovered acciden- tally by a young American mp on guard duty, this marvellous windfall comes via the bar grapevine to the ears of an ill-assorted trio who plan to seize the shipment and stash it over the border by using the charit- able agency of the us air force rice-drops. The plotters are Murray Wilde, an Irish university lecturer and drifter, Sammy Ryderbeit, a tough Rhodesian Jew and ex- mercenary pilot, and Charles Pol, a fat French agent with many, contacts in the Asian underworld. Mr Williams' own ex- perience as a journalist in various theatres of war gives authenticity to a convincing and well sustained plot.

Further financial fiddles in the East are provided by David Dodge's Hatchetman, Hero is John Lincoln, a trained gunman for the us special services who, after years with his finger on the trigger and never having been called upon to pull it in the line of duty, is rapidly coming apart under the strain. Sent to Hong Kong to foil an ingeni- ous plot concerning us currency diversions to Peking via a Chinese financier with a foot in both camps, Lincoln finds himself out of his depth and finally uses his gun with fatal consequences all round. The best that can be said is that this tedious tale might make a good vehicle for James Coburn in one of his fantasy spy movies. North Cape is strong on technical data, but ends rather limply with the inevitable chase over the more rugged parts of a wintry Norway. The pilot of a very ad- vanced form of U2 reconnaissance plane has to make vital contact with a battle cruiser, to refuel and pass on urgent information about Soviet-Chinese border hostilities. The most engrossing section of the book deals with the incredible complexities of the plane-573 dials, verniers and digital read- outs—and the ingenious system which moni- tors and, if necessary, boosts the pilot's own physiological makeup to enable him to cope with the 573 dials, etc, for days on end. Mr Poyer seems defter in the air than on land, and the scenes of aerial combat and evasion are excellent.

A first and very funny comic novel by David Wheeler brings the inimitable Scoop instantly to mind, but the comparison is by no means unfavourable. The hapless Edwin Mould draws up a balance sheet of his life at the age of twenty-five; under Assets he puts youth?, self-knowledge and £28 4s Od; under Liabilities he puts, in true cablese, failure make name, still unhousehold word and non-possession wife (the latter after some reflection being transferred to assets). A chance remark about the presence of Chinese in Gulanda, one of Mould's wilder statements uttered as a desperate ploy in a tricky interview, sends him hot foot to Africa to report on the situation. Gulanda, as one might have expected, is populated by a marvellous assortment of absurd char- acters including the amiable President Nokwe, last seen by the opposition playing snooker in his Operations Room and cry- ing 'Gentlemen! You find me engaged in a symbolic act—potting the black', the Benson Buckleys who live in true colonial style cultivating roses and reverently guarding a collection of Biggin Hill relics, and a host of other odd fish. Circumstances of hilarious implausibility conspire to throw Mould into the limelight and, once there, he makes the most of it. Altogether a very droll escapade with some masterly touches.

Peter Dickinson's latest novel The Seals is as disturbingly original as its predecessors, Skin Deep and a Pride of Heroes. Detective Superintendent Pibble is summoned to a strange monastic community on a small Hebridean island by the querulous but brilliant Nobel prizewinner, Sir Francis Francis. Sir Francis, who 'has rare moments of penetrating lucidity punctuating periods of total senility, wants to get off the island and Pibble is encouraged to abet him, since the old man is the only surviving acquaint., ance of his father who once worked for Sir Francis at the Cavendish laboratory but

gave up his career suddenly in unexplained circumstances. The other inhabitants of the island are variously demented and, for monks, seem to have an unusual prepon- derance of ex-criminals in their ranks. In a roundabout way Pibble learns something of his father, discovers the commercial side to the monastery and reaches a kind of rap- prochement with the impossible Sir Francis. Both plot and characters are agreeably off- beat, and I look forward to Mr Dickinson's next Pibble adventure,