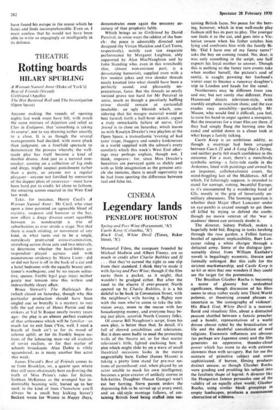 Spring and Port Wine (Paramount, 'A') Castle Keep (Columbia, 'X') Black God, White Devil (Times, Baker Street, 'X') Memorial Films, the company founded by Michael Medwin and Albert Finney, are so much in credit after Charlie Bubbles and If . . . that they've earned the right to one slip from their standard. I think they've made it with Spring and Port Wine; though if the film earns them a packet, as it might, that wouldn't be grudged either. But after the road to the elusive if ever-present North opened up by Charlie Bubbles, it is a bit doleful to be back in Coronation Street, with the neighbour's wife having a flighty row with the men who've come to take the tele- vision away, mum to the rescue with her housekeeping money, and everyone busy be- ing just plain, actorish North Country folks.

Of course Bill Naughton's script, from his own play, is better than that. In detail, it's full of shrewd amiabilities and tolerances. But it does-seem badly to need the protecting walls of the theatre set, or for that matter television's little, lighted enclosing box. A plot which might slide by on a wave of small theatrical occasions looks in the movie ungratefully bare. Father (James Mason) is taking a pretty lone stand for pre-war no- tions of parenthood; and, when played by an actor unable to mask his own intelligence, becomes a prize creator of unlikely storms in fish-kettles. Daughter (Susan George) won't eat her herring. Stern parent orders the depressing fish to be served up at every meal, and an old-style montage follows, of sus- taining British food being stuffed into sus-

taining British faces. No peace for the herr- ing, however, which in true well-made play fashion still has its part to play. The younger son feeds it to the cat, and goes into a Vic- torian swoon when his father catches him lying and confronts him with the family Bi- ble. Did I have one of my funny turns?' asks the boy on coming round. No, dear, it was only something in the script, one half expects his loyal mother to answer. Though this is nothing to the funny turn events take when mother herself, the picture's soul of sanity, is caught pawning her husband's winter coat to finance a runaway daughter's trip to London and heads for the canal.

Northerners may be different from you and me; but not surely that different. Peter Hammond directs television-style, with sturdily emphatic reaction shots; and the cast exudes rosy amiability—particularly Mr Mason, who would find it difficult, you feel, to raise his hand in anger against a mosquito. But the resources for a truer film are there, if they had simply flung the herring into the canal and settled down to a closer look at what keeps a family ticking.

Castle Keep is an ambitious oddity, as though a marriage had been arranged between Catch 22 and A Long Day's Dying, and neither party felt much confidence in the outcome. For a start, there's a mercilessly symbolic setting—a fairy-tale castle in the Ardennes, lined with paintings and owned by an impotent, collaborationist count, the mind-boggling last of the Maldorais. All of which, I'd falteringly suppose, is intended to stand for corrupt, rotting, beautiful Europe, as it's encountered by a wandering band of GIs, mostly in the grip of luxuriantly un- military obsessions. The looming question is whether their Major (Burt Lancaster under an eye-patch) is crazed enough to get them all killed by trying to defend the castle; though no movie veteran of the 'war is madness' theme can seriously doubt it.

The director, Sidney Pollack, makes a hopefully bold bid, flinging in tanks lurching through the rose garden, a Fellini fantasy brothel of opulent implausibility, Burt Lan- caster riding a white charger through a defeated army. Some of the dialogue (pre- sumably direct from William Eastlake's novel) is beguilingly eccentric, literate and formally unhinged. But this calls for the strictest marksmanship; and Castle Keep is so hit or miss that one wonders if they could see the target for the pretensions.

The Brazilian Glauber Rocha is becoming a name of gloomy but undoubted significance, though discussion of his films seems to stray rather easily into Third World polemic, or theorising around phrases as uncertain as 'the iconography of violence'. His Black God, White Devil is a morose, florid and ritualistic film, about a distracted peasant shuttled between a fanatic preacher and a bandit, representatives of a world driven almost rabid by the brutalisation of life and the doubtful consolation of mad religions. Eisenstein influences are obvious (so perhaps are Japanese ones) and the film generates an oppressive, thunder-cloud power which has more to do with extreme slowness than with savagery. But for me the mixture of primitive subject and some sophisticated, if barren, filming produces distinct unease, as though Glauber Rocha were goading and prodding his subject into the fatalistic shape of legend. A director like the Hungarian Jancso persuades one of the validity of an equally alien world; Glauber Rocha, using similar bleak groupings in empty landscapes, produces a monotonous abstraction of wildness.