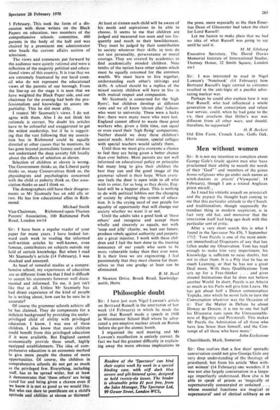 Sir: I have just seen Nigel Lawson's article on Bertrand Russell in the SPECTATOR of last week (14 February) in which he made the point that Russell made a speech in 1948 in Westminster School Hall where he advo- cated a pre-emptive nuclear attack on Russia before she got the atomic bomb.

I organised the said meeting and Mr Lawson's recollection is entirely correct. In fact we had the greatest difficulty in explain- ing away the more obvious implications to the press, more especially as the then Emer- itus Dean of Gloucester had taken the chair for Lord Russell!

Let me hasten to make plain that we had no idea of what Russell was going to say until he said it.

Perhaps he could also explain how it was that Russell, who had influenced a whole generation to shun conscription and refuse war service, could, when he had gone to the us, then proclaim that Hitler's war was different from all other wars, and should, therefore, be supported?