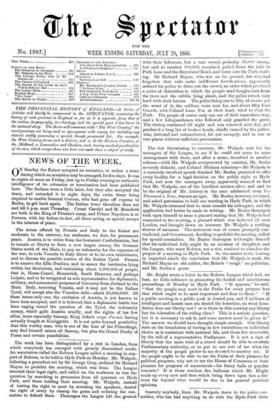 The week has been distinguished by a riot in London,

from which everybody has emerged with greatly diminished credit. An association called the Reform League called a meeting in sup- port of Reform, to be held in Hyde Park on Monday. Mr. Walpole, following a precedent set by Sir George Grey, ordered Sir Richard Mayne to prohibit the meeting, which was done. The League asserted their legal right, and called on the workmen to test the question by marching in procession from all quarters on Hyde Park, and there holding their meeting. Mr. Walpole, instead of testing the right to meet by arresting the speakers, denied the right of entry by closing the gates and ordering the con- stables to defend them. Thereupon the League left the ground

with their followers, but a vast crowd, probably 50,000 strong, but said to number 100,000, remained, pulled down the rails in Park Lane and the Bayswater Road, and burst into the Park exult- ing. Sir Richard Mayne, who was on the ground, but who had forgotten that rails make indifferent fortifications, apparently ordered his police to drive out the crowd, an order which proluced a series of skirmishes in which the people used boughs torn from the trees and the rubble lying about, and the police struck very hard with their batons. The police being one to fifty of course got the worst of it, the soldiers were sent for, and about fifty Foot Guards, with Colonel Lane Fox at their head, tried to clear the Park. The people of course only ran out of their immediate way, and a few Lifeguardsmen who followed only guarded the gates. The rioting continued till night and was renewed next day, awl produced a long list of broken heads, chiefly caused by the police, who, irritated and outnumbered, hit out savagely, and in one or two places without sufficient provocation.