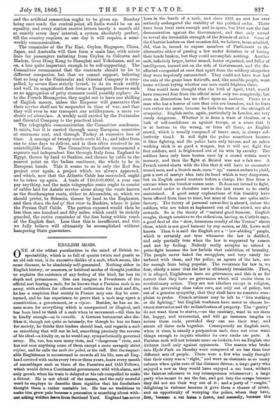 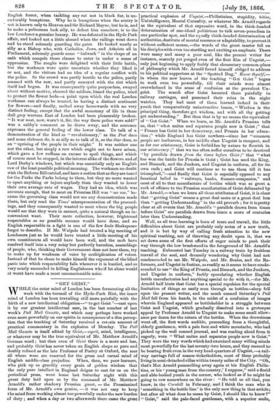 ONE of the oddest peculiarities in the mind of British re- spectability, which is as full of quaint twists and gnarls as an old oak root, is its excessive dislike of a mob, which seems, like some diseases, to be absolutely self-generated. Nothing either in English history, or manners, or habitual modes of thought justifies -or explains the existence of any feeling of the kind, far less its -depth and permanence. One can imagine a Frenchman of the -official sort fearing a mob, for he knows that a Parisian mob is an -army, with soldiers for officers and enthusiasts for rank and file, he has a suspicion that society in Francs may one day be over- turned, and he has experience-to prove that a mob may upset a -constitution, a government, or a regime. Besides, he has an in- nate scorn for everything which is unorganized or illogical, and -has been bred to think of a mob when in movement—till then he as kindly enough—as /a canaille. A German bureaucrat also dis- likes it, though not quite so intensely, for though he has no fears for society, he thinks that leaders should lead, and regards a mob -as something that will not be led, something precisely the reverse -of his ideal—a kindly or, as he would say, sympathetically governed army. He, too, has seen many riots, and "dangerous" riots, and has not seen anything come of them except a more savagely strict regime, and he calls the mob der pobel, or the raff. But the respect+ able Englishman is accustomed to crowds all his life, sees all Eng- land covered with mobs every two or three years, hears every month -of assemblages such as those of the Foresters and Odd Fellows, which would drive a Continental government wild with alarm, and only growls when his train is delayed or his cab compelled to make -a detour. He is not afraid of the masses, and the only scornful word he employs to describe them signifies that his forefathers thought them a rather unstable lot. He has no traditions to make him grow pale because a procession is marching about with- • .1)ut asking wsitien,leavelrom Scotland Yard. England lumnever

been in the hands of a mob, and since 1831 no riot has ever seriously endangered the stability of the political order. There have been local riots enough and to spare, but 1848 saw the last demonstration against the Government, and that only served to reveal the irresistible strength of the friends of order. Some of the Chartist leaders on that occasion did, we believe, mean mischief, did, that is, intend to expose members of Parliament to the alternative either of passing a law under dictation or of having their heads broken, but they could accomplish nothing. Another mob, infinitely larger, better armed, better organized, and fuller of intelligence, turned out on the side of Government, and the dis- affected recognized at once that apart from the soldiery altogether they were hopelessly outmatched. They could not have won had the rule of the game been fisticuffs, and, like sensible people, went home without trying whether one man could frighten three.