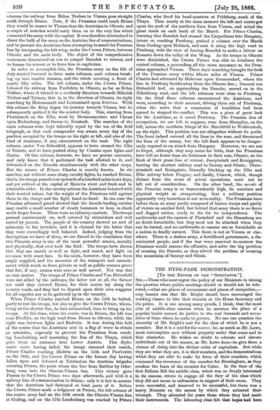 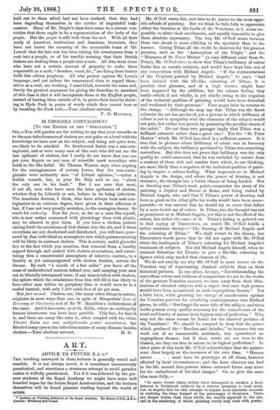 [To THE EDITOR OF THE "SPECTATOR."] SIR,—Those who most regret the policy of our Ministers in raising the question where public meetings should or should not be tole- rated,—what are places of amusement and places of occupation,— may lament also that Mr. Bright should have encouraged the working classes to bite their thumbs at the Home Secretary and the police. It is one among many proofs, I think,*that the most able of middle-class orators when he assumes the place of a popular leader cannot do justice to the real demands and neces- sities of those whom he seeks to govern. No one can question the sincerity of Mr. Bright's zeal for the class of which he is not a member. But it is a zeal for the masses ; he, as much as Mr. Lowe, must contemplate men without property under that name and in that character. He wishes no doubt to educate and elevate individuals out of the masses, as Mr. Lowe does—to give them a chance of rising into the diviner order of capitalists. But while they are what they are, it is their numbers, and the demonstrations which they are able to make by force of their numbers, which command the reverence of the member for Birmingham, as they awaken the fears of the member for Caine. In the time of the first Reform Bill the middle class, which was so deeply interested in its success, strove to engage all the fury of the class which they did not mean to enfranchise in support of their cause. They were successful, and deserved to be successful, but there was a heavy Nemesis on the means by which they achieved their triumph. They alienated for years those whom they had made their instruments. The labouring class felt that hopes had been held out to them which had not been realized, that they had been degrading themselves in the service of ungrateful task- masters. Many of Mr. Bright's class have come to a sincere con- viction that there ought to be a representation of the body of the people. But the people is still with them the mob. With all their study of American institutions and American literature, they have not learnt the meaning of the memorable boast of Mr. Lowell that the late war has been raising his countrymen from a mob into a people, or of his terrible warning that their British fathers are sinking from a people into a mob. All who treat those who have not a certain amount of property to make them respectable as a mob, "drunken, venal, &c.," are doing there best to fulfil this odious prophecy. All who protest against Mr. Lowe's language, and yet induce the unmoneyed class to regard them- selves as a mob, are working, I must think, towards the same end.. Surely the greatest argument for giving the franchise to members of this class is that it will incorporate them in the English people, instead of leaving them outside of it, to prove their force by shout- ing in Hyde Park in praise of words which they cannot hear or by breaking the Park rails.—Your obedient servant,