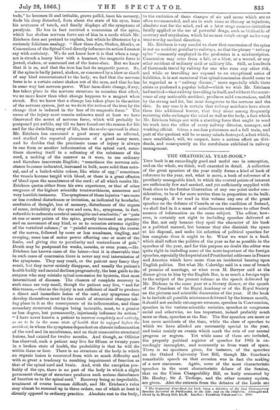 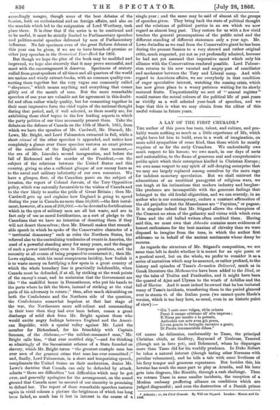 Tars book is an exceedingly good and useful one in conception, and on the whole, we think, well executed in detail. A collection of the great speeches of the year really forms a kind of book of reference to the year, and, what is more, a book of reference of a peculiarly manageable kind, in which the central points of interest are sufficiently few and marked, and yet sufficiently supplied with fresh clues to the further illustration of any one point under con- sideration, to be of far more service than in proportion to its bulk. For example, if we read in this volume any one of the great speeches on the defence of Canada or on the condition of Ireland, we shall find in it a mass of miscellaneous reference to other fresh sources of information on the same subject. The editor, how- ever, is certainly not right in including speeches delivered at the Bar, not only because they spoil the character of his book as a political manual, but because they also diminish the space at his disposal, and make his selection of political speeches far less complete than it ought to be. What we want is a book which shall reflect the politics of the year as far as possible in the speeches of the year, and for this purpose no doubt the editor was quite right in including some of the more important of the foreign speeches, especially thelmperial and Presidential addresses in France and America which have more than an incidental bearing upon English politics. But what Mr. Coleridge said in a case of breach of promise of marriage, or what even M. Berryer said at the dinner given to him by the English Bar, is as much a foreign topic to the subject of the present volume as the speech delivered by Mr. Dickens in the same year at a literary dinner, or the speech of the President of the Royal Academy or of the Royal Society on the pictures and scientific discoveries of the year. If the book is to include all possible utterances delivered by the human mouth, it should not exclude extempore sermons, speeches in Convocation, speeches in the various scientific societies, speeches at congresses social and otherwise, no less important, indeed probably much more so than, speeches at the Bar. The Bar speeches are more or less mere accidents of the time, while the class of speeches to which we have alluded are necessarily special to the year, and insist mainly on events which mark the rate of our annual progress or regress. Yet while some of these are included, the properly political register of speeches for 1865 is ex- ceedingly incomplete, and necessarily so from want of space. There is no specimen given, for instance, of the speeches on the Oxford University Test Bill, though Mr. Goschen's remarkable speech on that occasion was in fact the making of a new statesman. Again, none of the most characteristic speeches in the most characteristic debate of the Session, that on the Union Chargeability Bill, so hotly contested by Mr. Henley, Sir J. Trollope, and the other country squires, are given. Also the extracts from the debates of the Lords are The Oratorical Year-Book for 1865, being a Selection of the But Contemporary Speeches Delivered in Parliament, at the Bar, and on the Platfirm. /annoyed ana edited by A. klcury Hill, LLB. Louden: Frederick Warne ad Co. 1866

exceedingly meagre, though some of the best debates of the Session, both on ecclesiastical and on foreign affairs, and also on the scandals which led to the resignation of Lord Westbury, took place there. It is clear that if the series is to be continued and to be useful, it must be strictly limited to Parliamentary speeches and politico-social speeches delivered by men of Parliamentary influence. No fair specimen even of the great Reform debates of this year can be given, if we are to have breach-of-promise or other jury speeches in the Oratorical Year-Book for 1866.

But though we hope the plan of the book may be modified and improved, we hope also sincerely that it may prove successful, and meet with the encouragement it deserves. Specimens of oratory culled from great speakers of all times and all quarters of the world are useless and windy extract-books, with no common quality con- necting them together but the very vague one commonly called "eloquence," which means anything and everything that comes glibly out of the mouth of man. But the more remarkable speeches of one year are valuable not for agreement in this doubt- ful and often rather windy quality, but for connecting together in their most impressive form the chief topics of the national thought during that period, and, if well selected, as these mostly are, for exhibiting those chief topics in the few leading aspects in which the party politics of our time necessarily present them. Take the debate on the defence of Canada on the 13th of March, 1865, from which we have the speeches of Mr. Cardwell, Mr. Disraeli, Mr. Lowe, Mr. Bright, and Lord Palmerston extracted in full, while a short résumé of the other speeches is appended, and notice how completely a glance over those speeches restores an exact picture of the condition of the English mind at that moment,— the era of Mr. Lincoln's second inauguration, and before the fall of Richmond and the murder of the President,—on the subject of the relations between the United States and this country, giving us also a sufficient glimpse of our uneasy fears as to the naval and military inferiority of our own resources. We have a glimpse, first, of the Canadian panic on the subject of invasion, the report of Colonel Jervois, of the Tory Opposition policy, which was naturally favourable to the wishes of Canada and to the view likely to soothe the pride of Great Britain ; then Mr. Cardwell gets up and explains how England is going to spend during the year in Canada no more than 50,000/.—the first instal- ment, however, of a sum of 200,000/.—to be devoted to fortifications which in the eyes of military men are all but waste, and are in fact only of use as moral fortifications, as a sort of pledge to the Canadians that we have no intention of deserting them if they will not desert themselves ; then Mr. Disraeli makes that remark- able speech in which he spoke of the Conservative character of a "territorial democracy" such as rules the Northern States, but referred also to the centralizing tendencies of events in America, the need of a powerful standing army for many years, and the danger of such a power interfering even in European questions, and the necessity at all events of being prepared to counteract it ; then Mr. Lowe explains, with his usual conspicuous lucidity, how foolish it is to waste money on fortifying a few spots in a great country of which the whole boundary line is practically indefensible, when Canada must be defended, if at all, by striking at the weak points of the enemy's coast, and he maintains that the Government are like "the unskilful boxer in Demosthenes, who put his hands to the parts where he felt the blows, instead of striking at the vital parts of his adversary in return ;" then, after much skirmishing on both the Confederate and the Northern side of the question, the Confederates somewhat hopeless at that last stage of the war, the Northerners more self-reliant and commanding in their tone than they had ever been before, comes a great discharge of solid shot from Mr. Bright against those who would excite angry feelings between England and the Ameri- can Republic, with a special volley against Mr. Laird the member for Birkenhead, for his friendship with Captain Semmes, of the Alabama,—"the mildest-mannered man," Mr. Bright calls him, "that ever scuttled ship,"—and for thinking so admiringly of the Secessionist scheme of a State founded on slavery, which Mr. Bright terms "the greatest exataple man has ever seen of the greatest crime that man has ever committed ;" and, finally, Lord Palmerston, in a short and temporizing speech, compliments the United States on their moderation, denies Mr. Lowe's doctrine that Canada can only be defended by attack, admits "there are difficulties" but difficulties which may be got over, and generally apologizes for the arrangement, on the sound ground that Canada must be assured of our sincerity in promising to defend her. The report of these remarkable speeches restores again in vivid colours a picture the brightness of which has long been faded, so much has it lost in interest in the course of a

single year ; and the same may be said of almost all the groups of speeches given. They bring back the state of political thought and the relations of political parties in an era which we now regard as almost long past. They restore for us with a few vivid touches the general preoccupations of the public mind and the different standing of different statesmen only a year ago. Mr. Lowe dwindles as we read from the Conservative giant he has been during the present Session to a very shrewd and rather original critic, much respected, yet not as yet profoundly admired, because he had not yet assumed that imperative mood which only his alliance with the Conservatives rendered possible. Lord Palmer- ston returns to his now vacated and empty post of conciliator and moderator between the Tory and Liberal camp. And with regard to American affairs, we see everybody in that condition of eager speculative interest, watching the coming crisis, which has now given place to a weary patience waiting for its slowly matured fruits. Unquestionably no sort of "annual register " would restore the actual colours of the political life of past years as vividly as a well selected year-book of speeches, and we hope that this is what we may obtain from the editor of this useful volume in future years.