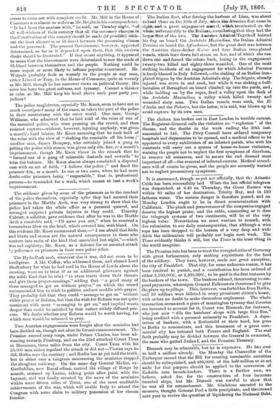 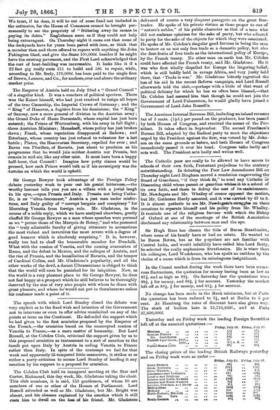 Bismark may be admirable, but he is expensive. He has

cost us half a million already. On Monday the Chancelkm of the Exchequer moved that the Bill for creating terminable- annuities should be relinquished, and 495,000/. of the half-million or so set aside for that purpose should be applied to the conversion of Enfields into breech-loaders. There is a further sum, we believe, asked for, for the construction of four immense turreted ships, but Mr. Disraeli was careful to show that he was all for retrenchment. Mr. Gladstone assented to the measure, thought General Peel a little precipitate, and threatened next year to revive the question of liquidating the National Debt.

We trust, if he does, it will be out of some band not included in the estimates, for the House of Commons cannot be brought per- manently to see the propriety of "frittering away its means in paying its debts." Englishmen seem self they could not help being extravagant. On Thursday night it came out that some of the dockyards have for years been paved with iron, so thick that 41, member then and there offered to repave with anything Sir John Pakington liked, and give the State 100,000/. besides if he might have the exustmg pavement, and the First Lord acknowledged that the cost of boat-building was inexcusable. It looks like it if a 22 feet gig really costs 21/. to build and 58/. to repair, while, according to Mr. Seely, 170,0001. has been paid to the single firm -.of Brown, Lennox, and Co., for-anchors, over and above the ordinary .market price.