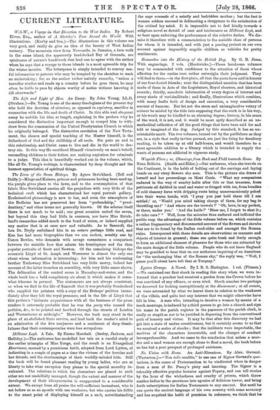 The Lives of the Seven Bishops. By Agnes Strickland. (Bell

and Dalcly.)—Kings andliCaisers, princes and princesses having been used up, the purple gives place to the lawn, and to the contemplation of that fabric Miss Strickland carries all the prejudices with very little of the technical craft which has characterized her royal portrait gallery. Ecclesiastical phraseology is new to her, and even the atmosphere of the Bodleian has not preserved her from "prebendship," " presi- dentiary," and other terms not generally known. Of the scheme itself there is not much to be said ; one great occasion united the seven, but beyond this they had little in common, nor have Miss Strick- land's researches added much to the bond of union, or indeed supplied any matter that is at once new and valuable. As to Sancroft, the late Dr. Doyly embalmed him in an octavo perhaps little read, and Ken has had more biographies than we can reckon, notably one by Canon Bowles, who demands with savage earnestness a comparison between the amiable face that adorns his frontispiece and the then popular portraits of Scott and Newton. Of the remaining bishops the eccentric Lloyd of St. Asaph and Worcester is almost the only one about whom information is interesting ; for him and his conforming brother Trelawney Miss Strickland has very little mercy, indeed her account of the latter trenches on scurrility, with very little cause shown. The delineation of the central scene is Macaulay-and-water, and the whole book has a bald compilatory air about it which makes it some- what irksome in perusal. The statements are not always consistent, as when we find in the life of Sancroft that it was probably Sunderland who supplied the printers with a copy of the Bishops' petition imme- diately after they left the royal presence, and in the life of Lloyd that this prelate's "intimate acquaintance with all the business of the press renders it extremely probable that he was the party who caused the petition, &c., to be printed and hawked through the streets of London and Westminster at midnight." However, the book may stand in the place of an abolished State service, and lead back the reader's mind to an admiration of the five nonjurora and a sentiment of deep thank- fulness that their contemporaries were less scrupulous.