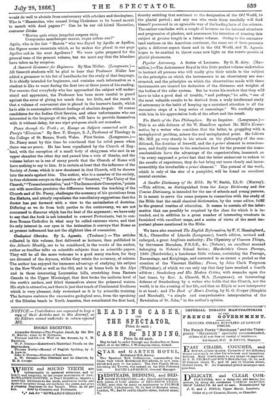 Peace through the Truth ; or, Essays on Subjects connected

with Dr. Pusey's "Eirenicon." By Rev. T. Harper, S. J., Professor of Theology in the College of -St. Benno, North Wales. First Series. (Longmans.)— Dr._.Ensey must by this time be convinced that he cried peace when there was no peace. He has been repudiated by the Church of Eng- land, with the exception of a small body of clergymen who met in an upper chamber the other day and passed him-a vote of thanks, and the volume before -us is one of many proofs that the Church of Rome will have nothing to say to him. It is certain at least that the influence of the Society of.Jeaus, which is now dominant in that Church, will be thrown into the scale against him. The author, who is a member of the society, in-four elaborate essays on the question of "Reunion," "The Unity of 'the Churoli," " Transubstantiation," and "The Immaculate Conception," points out -with merciless precision-the difference between the teaching of the Church, and of Dr. Pusey, challenges the accuracy of his quotations from the Fathers, amintterly repurliates.the conciliatory suggestions that the doctor has put forward with a view to the uusimilation of doctrine. Differing as we do from both parties to the controversy, we are not concerned to discover which has the best of the argument ; we have only to say that the book is not intended to convert Protestants, but to con- firm Roman Catholics in what may be called extreme views, and that its only interest in our eyes is the intimation it conveys that Rome-as at present influenced has not the slightest idea of concession.