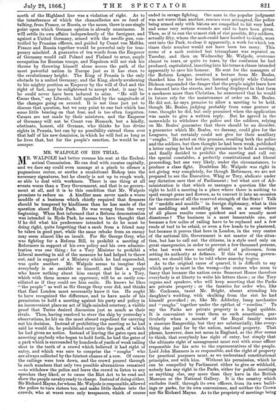 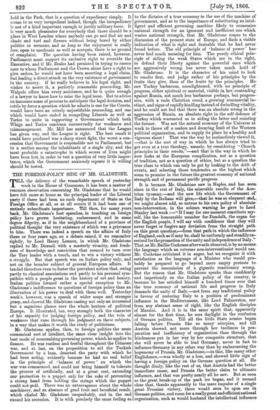 MR. WALPOLE had better resume his seat at the Ecclesi- astical Commission. He can deal with curates capitally, and we dare say could even manage at a pinch to silence a pugnacious rector, or soothe a recalcitrant Bishop into the necessary signatures, but he clearly is not up to rough work, or able to deal with workmen. There is one thing at all events worse than a Tory Government, and that is no govern- ment at all, and it is to this condition that Mr. Walpole promises to reduce us. A kindlier man never made a worse muddle of a business which chiefly required that firmness should be tempered by kindliness than he has made of the question about Hyde Park. He was wrong from the very beginning. When first informed that a Reform demonstration was intended in Hyde Park, he seems to have thought that if he did what his predecessor intended to do he must be doing right, quite forgetting that a snub from a friend may 'be taken in good part, while the same rebuke from an enemy rnay seem almost like an insult. For Sir George Grey, who was fighting for a Reform Bill, to prohibit a meeting of Reformers in support of his own policy and his own adminis- tration was one thing ; for a Tory Minister to prohibit a Liberal meeting in aid of the measure he had helped to throw out, and in support of a Ministry which he had superseded, was quite another. Mr. Walpole seems to imagine that everybody is as amiable as himself, and that a people who know nothing about him except that he is a Tory, which with them means an oppressor, will be as easily con- ciliated as if they could see him smile. He knows he likes -" the people" as well as Sir George Grey ever did, and thinks that East London must necessarily know it too. He ought to have recognized the difference, and to have made of his permission to hold a meeting against his party and policy in an inconvenient place an act of high-minded courtesy, a visible proof that Tories desired discussion just as much as their rivals. Then, having resolved to steer the ship by yesterday's observations, he hit on the most absurd expedient for carrying out his decision. Instead of prohibiting the meeting as he had said he would do, he prohibited entry into the park, of which he had given no notice. Instead of leaving the gates open and arresting anybody who began to hold forth, he had the gates of a park which is surrounded by hundreds of yards of weak railing shut in the teeth of a crowd which believed it had right of entry, and which was sure to comprise the " roughs " who are always collected by the faintest chance of a row. Of course the railings were torn down, and the crowd poured through in such numbers that only two possible alternatives remained —to withdraw the police and leave the crowd to listen to any speeches they liked, or to cause the Riot Act to be read and show the people cavalryready to charge. Instead of doing either, Sir Richard Mayne, for whom Mr. Walpole is responsible, allowed the police to turn rioters too, and make little dashes into the crowds, who at worst were only trespassers, which of course

ended in savage fighting. One man in the popular judgment was not worse than another, rescues were attempted, the police being armed only with batons are compelled to hit very hard, and some very serious wounds are said to have been given. Then, as if to run the utmost risk of riot possible, fifty soldiers, actually fifty, whom the mob could have hustled to death, were sent into the Park, to clear it apparently, a work for which ten times their number would not have been too many. This scene of a mob resisted but triumphant was repeated on Tuesday, and then on Wednesday Mr. Walpole, overcome almost to tears, or quite to tears, by the confusion he had produced, capitulated, inserting into his terms a clause intended apparently to save his honour. He sent for the managers of the Reform League, received a lecture from Mr. Beales, thanked him for his lecture, listened quietly while Colonel Dickson expounded the danger that the people might learn how to descend into the streets, and having displayed in that form a meekness more than Christian, he announced that he would in future rely for the maintenance of order on Mr. Beales. He did not, he says, promise to allow a meeting to be held, though Mr. Beales, judging probably from some gesture or tone, thought he did, but only promised when the application was made to give a written reply. But he agreed in the meanwhile to withdraw the police and the soldiers, relying on Mr. Beales' guarantee that there should be no disorder, a guarantee which Mr. Beales, we daresay, could give for the Leaguers, but certainly could not give for their auxiliary "roughs." He acted on this promise, recalling both the police and the soldiers, but then thought he had been weak, published a letter saying he had not given permission to hold a meeting, and finally decided to prohibit the meeting and call out the special constables, a perfectly constitutional and liberal proceeding, but one very likely, under the circumstances, to produce a class fight. Doubtless Mr. Walpole was right in not giving way completely, for though Reformers, we are not prepared to see the Executive, Whig or Tory, abdicate under any dictation save that of Parliament ; but what sort of Ad- ministration is that which so manages a question like the right to hold a meeting in a place where there is nothing to spoil except grass and flowers, as to convert it into an occasion for the exercise of all the reserved strength of the State? Talk of "meddle and muddle" in foreign diplomacy, what is this but meddling and muddling at home, on a scene where of all places results come quickest and are usually most disastrous ? The business is a most lamentable one, not because a few miles of railing have to be replaced and a few roods of turf to be relaid, or even a few heads to be plastered, but because it proves that here in London, in the very centre of the national life, Government is not master of the situa- tion, but has to call out the citizens, in a style used only on great emergencies, in order to prevent a few thousand persons, who last week were mortally afraid of policemen, from setting its authority at defiance. If this be strong govern- ment, we should like to be told where anarchy begins.

As to the original cause of quarrel, it is difficult to say which party is most in the wrong—the orators who seem to fancy that because the nation owns Somerset House therefore everybody is at liberty to write his letters there ; or the Tory organs and speakers, who will keep asserting that the Parks are private property ; or the fanatics for order who, like Mr. Cochrane, taunt Mr. Bright, absent attending his daughter's wedding, with skulking from the riot he had himself provoked ; or, like Mr. Adderley, lump mechanics and "roughs" together under the epithet of "rowdies." To say the Parks are private property is a legal quibble. It is convenient to treat them as such sometimes, par- ticularly when a member of the Royal family wants a sinecure Rangership, but they are substantially, like every- thing else paid for by the nation, national property. That phrase, however, does not mean in England, as the Star seems to think, that everybody has right of entry, but simply that the ultimate right of management must rest with some officer responsible for his acts to the representatives of the people. Lord John Manners is so responsible, and the right of property for practical purposes must, as we understand constitutional principles, rest with him. Without his permission, which he can be compelled by Parliament either to give or withhold, nobody has any right in the Parks, either for public meetings or anything else, any more than they have in the British Museum or the National Gallery. It is the country which excludes itself, through its own officers, from its own build- ings or parks, for its own convenience, and neither the Crown nor Sir Richard Mayne. As to the propriety of meetings being held in the Park, that is a question of expediency simply. It seems to us very inexpedient indeed, though the inexpediency is not of a kind important enough to justify military force. It is very much pleasanter for everybody that there should be a place in West London where anybody can go and find air and shade and turf and flowers without being bored by either politics or sermons, and as long as the enjoyment is really free, open to mechanic as well as marquis, there is no ground of complaint. The question having been raised, however, Parliament must support its exclusive right to override the Executive, and if Mr. Beales had persisted in trying to coerce men to whom Parliament and the Crown alone have a right to give orders, he would not have been asserting a legal claim, but leading a direct attack on the very existence of government in the country. If he really believes in his legal right, and wishes to assert it, a perfectly reasonable proceeding, Mr. Walpole offers him every assistance, and he is quite enough of a lawyer to know how to raise the legal issue. But to advise an immense mass of persons to anticipate the legal decision, and settle by force a question which he admits is one for the Courts, would have been an utterly unjustifiable proceeding, and one which would have ended in compelling Liberals as well as Tories to unite in supporting a Government which both Whigs and Tories condemn unreservedly for weakness and mismanagement. Mr. Mill has announced that the League has given way, and the League is right. The best result it could have produced was a sharp street fight, the worst a con- cession that Government is responsible not to Parliament, but to a section among the inhabitants of a single city, and the most probable a catastrophe in which scores of lives might have been lost, in order to test a question of very little impor- tance, which the Government anxiously repeats it is willing should be tested.