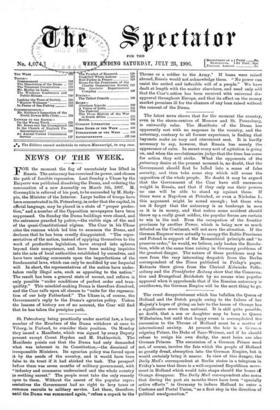 St. Petersburg being practically under martial law, a large number

of the Members of the Duma withdrew at once to Viborg, in Finland, to consider their position. On Monday they issued a Manifesto, which was signed by every Deputy present except Count Heyden and M. Stakhoviteh. The Manifesto points out that the Duma had only demanded what was inherent in its Constitution,—the dismissal of irresponsible Ministers. Its agrarian policy was forced upon it by the needs of the country, and it would have been false to its trust if it bad shirked the task. The prospect before them was seven months of military government, with "industry and commerce undermined and the whole country in seething unrest." The people must take the only remedy open to them. Without the assent of the popular repre- sentatives the Government had no right to levy taxes or summon recruits to military service. Let them, therefore, until the Duma was summoned again, "refuse a copeck to the Throne or a soldier to the Army." If loans were raised abroad, Russia would not acknowledge them. "No power can resist the united and inflexible will of a people." We have dealt at length with the matter elsewhere, and need only add that the Czar's action has been received with universal dis- approval throughout Europe, and that its effect on the money market promises ill for the chances of any loan raised without the consent of the Duma.