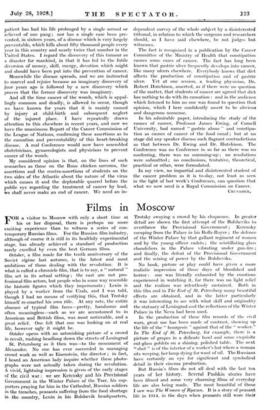 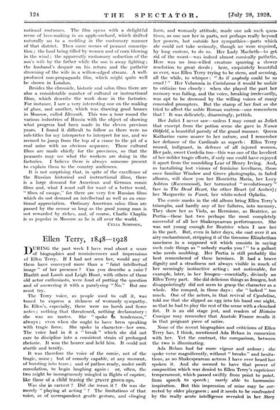 FOR a visitor to Moscow with only a short time at his or her disposal, there is perhaps no more exciting experience than to witness a series of con- temporary Russian films. For the Russian film industry, although of course it is still in its healthily experimental stage, has already achieved a standard of production rarely excelled by even the best German films.

October, a film made for the tenth anniversary of the Soviet regime last autumn, is the latest and most ambitious of those dealing with the revolution. It is what is called a chronicle film, that is to say, a " natural " film set in its actual setting ; the cast are not pro- fessional film actors, but people who in some way resemble the historic figures which they impersonate ; Lenin is played by a worker from the Urals, and I was told, though I had no means of verifying this, that Trotsky himself re-enacted his own role. At any rate, the entire absence of typical film faces—pretty, handsome and often meaningless—such as we are accustomed to in American and British films, was most noticeable, and a great relief. One felt that one was looking on at real life, however ugly it might be.

October opens with an astonishing picture of a crowd in revolt, rushing headlong down the streets of Leningrad St. Petersburg as it then was—to the monument of Alexander. No one has ever succeeded in managing crowd work so well as Eisenstein, the director ; in fact, I heard an American lady inquire whether these photo- graphs were not actually taken during the revolution. A vivid, lightning impression is given of the early stages of the civil war : we see Kerensky and his Provisional Government in the Winter Palace of the Tsar, his sup- porters praying for him in the Cathedral, Russian soldiers in the trenches, peasants suffering from the food shortage in the- country, Lenin in his Bolshevik headquarters, Trotsky swaying a crowd by his eloquence. In greater detail are shown the first attempt of the Bolsheviks to overthrow the Provisional Government ; Kerensky escaping from the Palace in his Rolls-Royce ; the defence of the Winter Palace by that gallant regiment of women and by the young officer cadets ; the scintillating glass chandeliers in the Palace vibrating under gun-fire ; and finally, the defeat of the Provisional Government and the seizing of power by the Bolsheviks.

No book, picture or play could have given a more realistic impression of those days of bloodshed and horror : one was literally exhausted by the emotions experienced in watching it, for there was no light relief and the realism was relentlessly sustained. Both in this film and in The End of St. Petersburg many beautiful effects are obtained, and in the latter particularly it was interesting to see with what skill and originality the statuary of Leningrad and the reflections of the Winter Palace in the Neva had been used.

In the production of these film records of the civil wars, great use has been made of contrast, showing up the life of the " bourgeois " against that of the " worker." In The End of St. Petersburg, for example, there is a picture of grapes in a delicate bowl and some exquisite cut-glass goblets on a shining, polished table. The next " shot " is of the interior of a worker's but where a woman sits weeping, her lamp dying for want of oil. The Russians have certainly an eye for significant and symbolical detail in their cinema production.

But Russia's films do not all deal with the last ten years of her history. Several Pushkin stories have been filmed and some very charming films of everyday life are also being made. The most beautiful of those I saw was The Women of Ryazan. It is a story of peasant life in 1914, in the days when peasants still wore their national costumes. The film opens with a delightful scene of love-making in an apple-orchard, which drifted naturally on to a wedding in the customary manner of that district. Then came scenes of peasant conscrip- tion ; the land being tilled by women and of corn blowing in the wind ; the apparently customary seduction of the son's wife by the father while the son is away fighting ; the husband's despair on his return and the pathetic drowning of the wife in a willow-edged stream. A well- produced non-propaganda film, which might quite well be shown in London.

' Besides the chronicle, historic and salon films there are also a considerable number of cultural or instructional films, which describe the work done in the factories. For instance, I saw a very interesting one on the making Of glass, and another, which was drawing good houses in Moscow, called Eleventh. This was a tour round the Various industries of Russia with the object of showing what progress had been made in the eleven previous years. I found it difficult to follow as there were no sub-titles for my interpreter to interpret for me, and we Seemed to jump from the top of a crane to the pit of a coal mine with no obvious sequence. These cultural films are made chiefly for the provinces, so that the peasants may see what the workers are doing in the factories. I believe there is always someone present to explain them to the country audiences.

It is not surprising that, in spite of the excellence of the Russian historical and instructional films, there is a large demand for American and German comic films and, what I must call for want of a better word, " films of escape," for there are very few Russian films which do not demand an intellectual as well as an emo- tional appreciation. Ordinary American salon films are passed by the censor so long as the good young man is not rewarded by riches, and, of course, Charlie Chaplin is as popular in Moscow as he is all over the world.