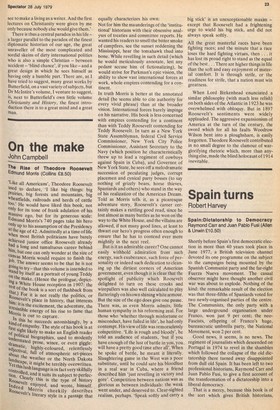 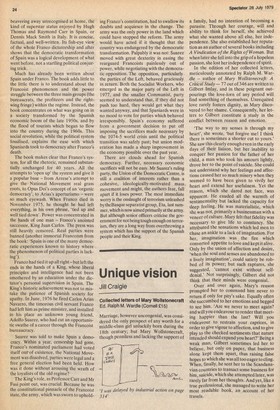 Shortly before Spain's first democratic election in more than 40 years took place in June 1977, a British television channel aevoted its one programme on the subject to the campaigns being mounted by the Spanish Communist party and the far-right Fuerza Nueva movement. The casual observer might have thought another civil war was about to explode. Nothing of the kind: the remarkable result of the election was that three-fifths of Spaniards voted for two newly-organised parties of the centre. The Communists, the only party with a large underground organisation under Franco, won just 9 per cent; the neoFascists, offspring of Franco's huge, bureaucratic umbrella party, the National Movement, won 2 per cent.

Good news, it seems, is no news. The regiment of journalists which descended on Portugal in 1974 to revel in the shambles which followed the collapse of the old dictatorship there turned away disappointed from dull old Spain. It has been left to two professional historians, Raymond Carr and Juan Pablo Fusi, to give a first account of the transformation of a dictatorship into a liberal democracy.

That is a mercy, because this book is of the sort which gives British historians, beavering away unrecognised at home, the kind of superstar status enjoyed by Hugh Thomas and Raymond Carr in Spain, or Dennis Mack Smith in Italy. It is concise, factual, and well-written. Its fish-eye view of the whole Franco dictatorship and after shows that the democratic transformation of Spain was a logical development of what went before, not a startling political conjuring trick.

Much has already been written about Spain under Franco. The book adds little to the little there is to understand about the Francoist phenomenon and the power struggle between the three main groups (the bureaucrats, the profiteers and the rightwing fringe) within the regime. Instead, the book concentrates on what was going on in a society transformed by the Spanish economic boom of the late 1950s, and by the flood of tourists which began to flow into the country during the 1960s. This social revolution, while the political system fossilised, explains the ease with which Spaniards took to democracy after Franco'S death.

The book makes clear that Franco's system, for all the rhetoric, remained substantially unchanged for 40 years. All the attempts to 'open up' the system and give it a popular base – from Arrese's attempt to give the National Movement real grass roots, to Opus Dei's concept of an `organic democracy', to Arias's aperturismo – were so much eyewash. When Franco died in November 1975, he thought he had left everything, in his own phrase, `tied up and well tied dowri'. Power was concentrated in the hands of one man – Franco's anointed successor, King Juan Carlos. The press was still heavily censored. Real parties were banned (another immortal Francoism from the book: 'Spain is one of the many democratic experiences known to history where the phenomenon of political parties is lacking').

Franco had tied it up all right but left the ends in the hands of a King, whose liberal principles and intelligence had not been smothered by an education under the dictator's personal supervision in Spain. The King's historic achievement was not to mistake the patience of Spanish society for apathy. In June, 1976 he fired Carlos Arias Navarro, the timorous civil servant Franco had left him as prime minister, and installed in his place an unknown young friend, Adolfo Suarez, who had cut an opportunistic swathe of a career through the Francoist bureaucracy.

Suarez was told to make Spain a democracy. Within a year, censorship had gone, Franco's nominated parliament had voted itself out-of existence, the National Movement was dissolved, parties were legal and a free general election had been held. How was it done without arousing the wrath of the loyalists of the old regime?

The King's role, as Professor Carr and Mr Fusi point out, was crucial. Because he was the constitutional pinnacle of the Francoist state, the army, which was sworn to uphold ing Franco's constitution, had to swallow its doubts and acquiesce in the change. The army was the only power in the land which could have stopped the reform. The army would have acted if it thought that the country was endangered by the democratic transformation. Palpably it was not: Suarez moved with great dexterity in easing the rearguard Francoists painlessly out of power, while negotiating with the democratic opposition. The opposition, particularly the parties of the Left, behaved graciously in return. Both the Socialist Workers, who emerged as the major party of the Left in 1977, and the smaller Communist, party seemed to understand that, if they did not push too hard, they would get what they wanted anyway, and that Spaniards were in no mood to vote for parties which behaved irresponsibly. Spain's economy suffered from a government decision to put off imposing the sacrifices made necessary by the 1074-5 world crisis until the political transition was safely past; but union moderation has made a sharp improvement in the economy possible over the past year.

There are clouds ahead for Spanish democracy. Further, necessary economic sacrifices will not be easy. Mr Suarez's ruling party, the Union of the Democratic Centre, is still a coalition of interests rather than a cohesive, ideologically-motivated mass. movement and might, the authors fear, fall apart if it loses power. The most immediate worry is the onslaught of terrorism unleashed by theBasque separatist group, Eta, last summer, which is now aimed primarily at the army. But although senior officers criticise the government for not being tough enough on terrorism, they are a long way from overthrowing a system which has the support of the Spanish people and their King.