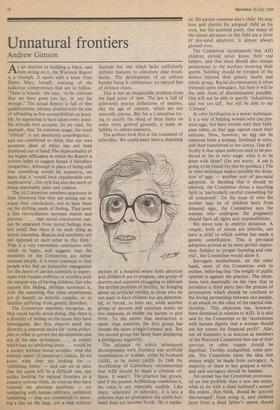 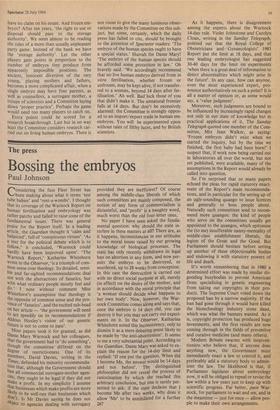 As an exercise in building a fence, and then sitting on it, the Warnock Report

is a triumph. It opens with a letter from Dame Mary herself, warning of the judicious compromises that are to follow: `There is bound,' she says, 'to be criticism that we have gone too far, or not far enough.' The actual Report is full of fine qualifications, phrases drafted with the aim of offending as few susceptibilities as possi- ble, by appearing to have taken every possi- ble attitude into account. So we read, for example, that 'In common usage, the word "ethical" is not absolutely unambiguous', and are comforted to think that our own eccentric ideal of ethics has not been dismissed out of hand.The impersonality of the higher officialese in which the Report is written helps to suggest broad if bloodless sympathies. Although in place of being told that something would be expensive, we learn that it 'would have considerable cost implications', this style has also the merit of being reasonably plain and concise.

The 16 Committee members announce in their foreword that they are setting out to argue their conclusions, not to base them on the shifting sands of feeling. They posit a fine reconciliation between reason and passion: ... that moral conclusions can- not be separated from moral feelings does not entail that there is no such thing as moral reasoning. Reason and sentiment are not opposed to each other in this field.' That is a very convenient conclusion with which to begin, and suggests that the members of the Committee are rather unusual people. It is more common to find people who feel an instinctive repugnance for the desire of certain scientists to experi- ment with human embryos or interfere with the natural way of having children, but who oppose this feeling, perhaps surmount it, with the reasoning that these experiments are of benefit to infertile couples, or to families suffering from genetic disorders.

The Committee members recognise, as they could hardly avoid doing, that there is a diversity of feeling on the issues they have investigated. But they observe amid this diversity a common desire for 'some princi- ples or other to govern the development and use of the new techniques .... A society which had no inhibiting limits ... would be a society without moral scruples. And this nobody wants' (Committee's italics). So we know what they are looking for 'inhibiting limits' — and can see at once that the quest will be a difficult one, not unlike looking for natural frontiers to a country without them. As soon as they have rejected the absolute positions — no tampering with human embryos, unlimited tampering — they are committed to draw- ing a line on the map, not a map without

features but one which lacks sufficiently definite features to constitute clear boun- daries. The development of an unborn human being is continuous: no natural line of defence exists.

This is not an insuperable problem from the legal point of view. The law is full of arbitrarily precise definitions of matters, like the age of consent, which are not naturally precise. But for a Committee try- ing to justify the siting of these limits on some more general grounds, it leads in- fallibly to embarrassments.

The authors look first at the treatment of infertility. We could paint here a charming picture of a hospital where both abortion and childbirth are in progress, one group of doctors and scientists struggling to alleviate the terrible problem of fertility, by bringing about an artificial sterility in those who do not want to have children but are determin- ed, or forced, to have sex, while another group of doctors and scientists works no less zealously to enable the barren to give birth. To the extent that destruction is easier than creation, the first group has chosen the more straightforward task. But the second group has lately been displaying a prodigious ingenuity.

The advance on which subsequent developments were founded was artificial insemination of women, either by husband (AIH), or by donor (AID). In 1948 the Archbishop of Canterbury recommended. that AID should be made a criminal of- fence. It wasn't. The practice has grown, and if the present Archbishop condemns it, his voice is not especially audible. Like many 'solutions' to infertility, it is less a solution than an alternative: the sterile hus- band does not become fertile. He is replac-

ed. He adopts someone else's child. He may love and cherish his adopted child as his own, but the essential point, that many of the recent advances in this field are a form of pre-natal adoption, is almost always glossed over.

The Committee recommends that AID children should never know their real fathers, and that these should also remain anonymous to the mothers receiving their sperm. Nothing should be revealed of the donors beyond their genetic health and ethnic group. Racial discrimination is often frowned upon nowadays, but here it will be the only form of discrimination possible. One will not be able to specify 'industrious and not too tall', but will be able to say `Chinese'.

In vitro fertilisation is a newer technique. It is a way of helping women who can pro- duce eggs, but have trouble with their fallo- pian tubes, so that eggs cannot reach their uteruses. Now, however, an egg can be removed from a woman, fertilised in vitro, and then transferred to her uterus. One dif- ficulty is that spare embryos tend to be pro- duced at the in vitro stage: what is to be done with them? (Do not worry. A use is going to be found for this by-product.) The in vitro technique makes possible the dona- tion of eggs — another sort of pre-natal adoption. In deciding that it should be allowed, the Committee shows a touching faith in 'particularly careful counselling for all concerned'. On the issue of who the mother may be of children born from donated eggs, the Committee says the woman who undergoes the pregnancy should have all rights and responsibilities.

We move now to embryo donation. A couple, both of whom are infertile, can have a child to which neither has made a genetic contribution. This is pre-natal adoption arrived at its most perfect expres- sion. Subject to 'proper licensing and con- trol', the Committee would allow it.

Surrogate motherhood, on the other hand, most of the Committee wish to outlaw, believing that 'the weight of public opinion is against the practice. The objec- tions turn essentially on the view that to introduce a third party into the process of procreation which should be confined to the loving partnership between two people, is an attack on the value of the marital rela- tionship.' This objection has, however, been dismissed in relation to AID. It is also said by the Committee to be 'inconsistent with human dignity that a woman should use her uterus for financial profit'. Alas, not all humanity is as anxious as members of the Warnock Committee that use of their uteruses or other organs should be dignified. Terribly undignified, some peo- ple. The Committee hates the idea that money might be made from surrogacy. A majority of them at last grasped a nettle, and said surrogacy should be banned.

No sooner has the Committee pronounc- ed on one problem than a new one arises, what to do with a dead husband's semen? His widow, they think, should be 'actively discouraged' from using it, and children born from a dead father's semen should have no claim on his estate. And frozen em- bryos? After ten years, 'the right to use or disposal should pass to the storage authority'. We seem almost to be reading the rules of a more than usually unpleasant party game. Instead of the bank we have the 'storage authority'. Let the other players gain points in proportion to the number of embryos they produce from apparently impossible positions. The ancient, innocent diversion of the very young, playing mothers and fathers, becomes a more complicated affair, when a single embryo may have four parents, as well as counsellors, a surrogate mother, a troupe of scientists and a Committee laying down 'proper practice'. Perhaps the game would need too many players to catch on.

Extra points could be scored for a research breakthrough. Last but in no way least the Committee considers research car- ried out on living human embryos. There is

not room to give the many luminous obser- vations made by the Committee on this sub- ject, but some, certainly, which the daily press has failed to cite, should be brought to the attention of Spectator readers: 'The embryo of the human species ought to have a special status.' Hurrah for Dame Mary! 'The embryo of the human species should be afforded some protection in law.' Oh bravely said. 'We accordingly recommend that no live human embryo derived from in vitro fertilisation, whether frozen or unfrozen, may be kept alive, if not transfer- red to a woman, beyond 14 days after fer- tilisation.' Ah well. Bad luck those of you that didn't make it. The unnatural frontier falls at 14 days. But don't be excessively alarmed: the Committee is strongly oppos- ed to an import/export trade in human em- embryos. You will be experimented upon without taint of filthy lucre, and by British scientists.