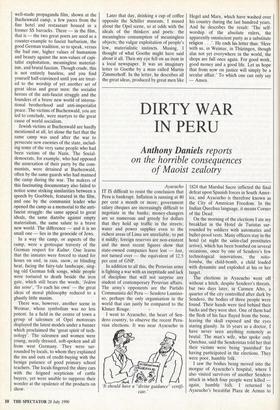 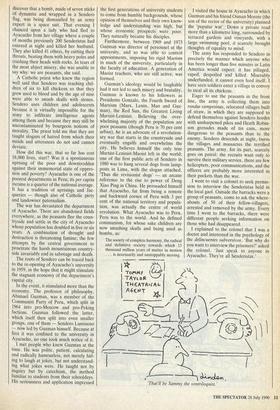 on the horrible consequences of Maoist zealotry

Ayacucho IT IS difficult to resist the conclusion that Peru is bankrupt. Inflation is running at 40 per cent a month or more; government salary cheques are increasingly difficult to negotiate in the banks; money-changers are so numerous and greedy for dollars that they hold up traffic in the streets; water and power supplies even to the richest areas of Lima are unreliable, to put it mildly; foreign reserves are non-existent and the most recent figures show that state-owned companies have lost — lost, not turned over — the equivalent of 12.5 per cent of GNP.

In addition to all this, the Peruvian army is fighting a war with an ineptitude and lack of discipline that will not surprise any student of contemporary Peruvian affairs. The army's opponents are the Partido Communista del Peru — Sendero Lumino- so, perhaps the only organisation in the world that can justly be compared to the Khmer Rouge. • I went to Ayacucho, the heart of Sen- dero country, to observe the recent Peru- vian elections. It was near Ayacucho in

'It should have a "divine guidance" certifi- cate.'

1824 that Marshal Sucre inflicted the final defeat upon Spanish forces in South Amer- ica, and Ayacucho is therefore known as the City of American Freedom. In the Indian Quechua language, it means Corner of the Dead.

On the morning of the elections I ate my breakfast in the Hotel de Turistas sur- rounded by soldiers with automatics and bullet-proof vests. Many officers stay in the hotel (at night the satin-clad prostitutes arrive), which has been bombed on several occasions, once by one of Sendero's few technological innovations, the nitio- bomba, the child-bomb, a child loaded with dynamite and exploded at his or her target.

The elections in Ayacucho went off without a hitch, despite Sendero's threats, but two days later, in Carmen Alto, a quarter of the city controlled after dark by Sendero, the bodies of three people were found. Their hands were tied behind their hacks and they were shot. One of them had the flesh of his face flayed from the bone, leaving the skull exposed and the eyes staring glassily. In 16 years as a doctor, I have never seen anything remotely as brutal. The man's wife, who spoke only Quechua, said the Senderistas told her that their victims were being 'punished' for having participated in the elections. They were poor, humble folk.

I saw the bodies being moved into the morgue of Ayacucho's hospital, where I also visited survivors of another Sendero attack in which four people were killed again, humble folk. I returned to Ayacucho's beautiful Plaza de Armas to

discover that a bomb, made of seven sticks of dynamite and wrapped in a Sendero flag, was being dismantled by an army expert in a space suit. That evening I chanced upon a lady who had fled to Ayacucho from her village where a couple of months previously 200 Senderistas had entered at night and killed her husband. They also killed 41 others, by cutting their throats, beating them with heavy poles and crushing their heads with rocks. In tears of the most abject misery, she was unable to say why: we are peasants, she said.

A Catholic priest who knew the region well said that Sendero was teaching chil- dren of six to kill chickens so that they grew used to blood and by the age of nine were able to smash skulls with stones. Sendero uses children and adolescents because it is virtually impossible for the army to infiltrate intelligence agents among them and because they may still be uncontaminated by bourgeois notions of morality. The priest told me that they are taught slogans of hatred from which their minds and utterances do not and cannot deviate.

How did this war, that so far has cost 18,000 lives, start? Was it a spontaneous uprising of the poor and downtrodden against their immemorial state of oppres- sion and poverty? Ayacucho is one of the poorest departments in Peru; its per capita Income is a quarter of the national average. It has a tradition of uprisings and Jac- queries — though also of Catholic piety and landowner paternalism.

The war has devastated the department of Ayacucho. There are abandoned fields everywhere, as the peasants flee the coun- tryside and settle in the city of Ayacucho whose population has doubled in five or six years. A combination of drought and destruction is threatening famine; the few attempts by the central government to penetrate the harsh mountainous country- side invariably end in sabotage and death.

The roots of Sendero can be traced back to the re-opening of Ayacucho's university in 1959, in the hope that it might stimulate the stagnant economy of the department's capital city.

In the event, it stimulated more than the economy. The professor of philosophy, Abimael Guzman, was a member of the Communist Party of Peru, which split in 1964 into pro-Moscow and pro-Peking factions. Guzman followed the latter, which itself then split into even smaller groups, one of them — Sendero Luminoso — now led by Guzman himself. Because at first it was confined to the university in Ayacucho, no one took much notice of it. I met people who knew Guzman at the time. He was polite, patient, calculating and radically humourless, not merely fail- ing to laugh at jokes, but not understand- ing what jokes were. He taught not by

inquiry but by catechism, the method familiar to students from their schooldays. His seriousness and application impressed

the first generations of university students to come from humble backgrounds, whose opinion of themselves and their own know- ledge and understanding was high, but whose economic prospects were poor. They naturally became his disciples.

Furthermore, between 1969 and 1973 Guzman was director of personnel at the university, and so was able to control appointments, imposing his rigid Maoism in much of the university, particularly in the faculty of education. A generation of Maoist teachers, who are still active, was formed.

Guzman's ideology would be laughable had it not led to such misery and brutality. Guzman is known to his followers as Presidente Gonzalo, the Fourth Sword of Marxism (Marx, Lenin, Mao and Guz- man), the Red Sun, the Greatest Living Marxist-Leninist. Believing the over- whelming majority of the population are poor peasants (though Peru is 70 per cent urban), he is an advocate of a revolution- ary war that starts in the countryside and eventually engulfs and overwhelms the city. He believes himself the only true Marxist-Leninist-Maoist left in the world; one of the first public acts of Sendero in 1980 was to hang several dogs from lamp- posts in Lima, with the slogan attached, `Thus die revisionist dogs' — an arcane reference to the rise to power of Deng Xiao Ping in China. He persuaded himself that Ayacucho, far from being a remote and backward corner of Peru with 3 per cent of the national territory and popula- tion, was actually the centre of world revolution. What Ayacucho was to Peru, Peru was to the world. And he defined communism, for whose sake children are now smashing skulls and being used as bombs, as: The society of complete harmony, the radical and definitive society towards which 15 thousand million years of matter in motion . . . is necessarily and unstoppably moving. I visited the house in Ayacucho in which Guzman and his friend Osman Morote (the son of the rector of the university) planned the 'popular war'. Down a private road more than a kilometre long, surrounded by terraced gardens and vineyards, with a large swimming pool, it scarcely brought thoughts of equality to mind.

The army has responded to Sendero in precisely the manner which anyone who has been longer than five minutes in Latin America would expect: it has pillaged, raped, despoiled and killed. Miserably underfunded, it cannot even feed itself. I have seen soldiers enter a village in convoy to steal all its chickens.

Eager to use the peasants in the front line, the army is collecting them into rondos campesinas, relocated villages built of straw, in which they are supposed to defend themselves against Sendero hordes with unsharpened pikes and Heath Robin- son grenades made of tin cans, more dangerous to the peasants than to the enemy. Sendero descends at night, burns the villages and massacres the terrified peasants. The army, for its part, scarcely goes on patrol: the recruits want only to survive their military service, there are few helicopters, poor communications, and the officers are probably more interested in their pockets than the war.

I went to visit a colonel to seek permis- sion to interview the Senderistas held in the local gaol. Outside the barracks were a group of peasants, come to ask the where- abouts of 50 of their fellow-villagers, arrested and removed by the army. Every time I went to the barracks, there were different people seeking information on those who had disappeared.

I explained to the colonel that I was a doctor and interested in the psychology of the delincuentes subversivos. 'But why do you want to interview the prisoners?' asked the colonel. 'Just speak to anyone in Ayacucho. They're all Senderistas.'

'That'll he Sammy the ventriloquist.'