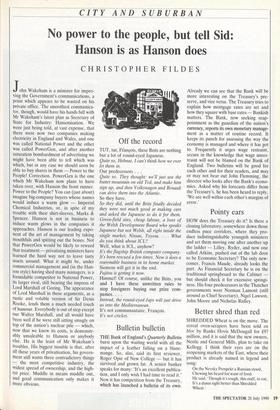 HOW does the Treasury do it? Is there a cloning laboratory, somewhere down those endless puce corridors, where they pro- duce indistinguishable youngish ministers and set them moving one after another up the ladder — Lilley, Ryder, and now one called Atkins, pushed out of the lab door to be Economic Secretary? The only new- comer, Francis Maude, already looks the part. As Financial Secretary he is on the traditional springboard to the Cabinet but should check it for excessive springi- ness. His four predecessors in the Thatcher governments were Norman Lamont (still around as Chief Secretary), Nigel Lawson, John Moore and Nicholas Ridley.