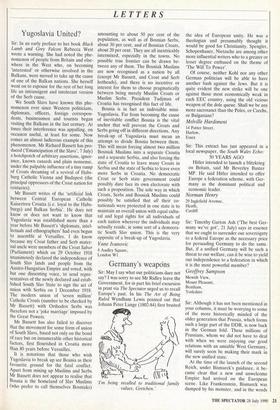 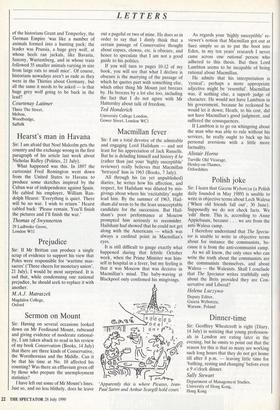 Sir: Although it has not been mentioned in your columns,

it must be worrying to some of the more historically minded of the older generation that Prussia, which forms such a large part of the DDR, is now back in the German fold. These millions of Prussians, whom we did not have to deal with when we were enjoying our good relations with an amiable West Germany, will surely soon be making their mark in the new unified state.

At the time of the launch of the second Reich, under Bismarck's guidance, it be- came clear that a new and unwelcome Empire had arrived on the European scene. Like Frankenstein, Bismarck was dumped by his monster, and in the words

of the historians Grant and Temperley, the German Empire 'was like a number of animals formed into a hunting pack; the leader was Prussia, a huge grey wolf, at whose heels ran jackals, like Bavaria, Saxony, Wurtemberg, and in whose train followed 35 smaller animals varying in size from large rats to small mice'. Of course, historians nowadays aren't as rude as they were in the Thirties about Germany, but all the same it needs to be asked — is that huge grey wolf going to be back in the lead?