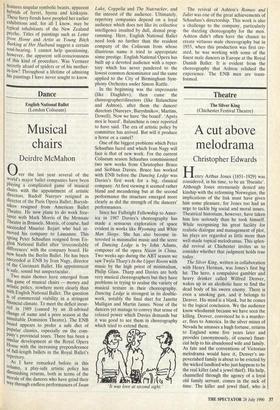 0 ver the last year several of the world's major ballet companies have been Playing a complicated game of musical chairs with the appointment of artistic directors. Rudolf Nureyev resigned as director of the Paris Opera Ballet; Barysh- nikov resigned from American Ballet Theatre. He now plans to do work free- lance with Mark Morris of the Monnaie Theatre in Brussels. Morris, of course, had succeeded Maurice Bejart who had re- moved his company to Lausanne. This spring Peter Schaufuss resigned from En- glish National Ballet after 'irreconcilable differences' with the company board. He NW heads the Berlin Ballet. He has been succeeded at ENB by Ivan Nagy, director of the Cincinnati Ballet. His appointment Is safe, sound but unspectacular. Two main, themes have emerged from this game of musical chairs — money and artistic policy, nowhere more clearly than with English National Ballet. The question IS of commercial viability in a stringent financial climate. To meet the deficit incur- red in 1989 (caused by an ill-advised change of name and a poor season at the unsuitable Dominion Theatre). The ENB board appears to prefer a safe diet of Popular classics, especially on the com- pany's provincial tours. There has been a similar development at the Royal Opera House with the increasing preponderance of full-length ballets in the Royal Ballet's repertory.

As I have remarked before in this column, a play-safe artistic policy has diminishing returns, both in terms of the morale of the dancers who have grind their Way through endless performances of Swan Lake, Coppelia and The Nutcracker, and the interest of the audience. Ultimately, repertory companies depend on a loyal audience which does not like its collective intelligence insulted by dull, dismal prog- ramming. Here, English National Ballet need look no further than the resident company of the Coliseum from whose illustrious name it tried to appropriate some prestige. English National Opera has built up a devoted audience with a reper- tory which has never pandered to the lowest common denominator and the same applied to the City of Birmingham Sym- phony Orchestra under Simon Rattle.

In the beginning was the impressario (like Diaghilev), then came the choreographer/directors (like Balanchine and Ashton), after them the dancer/ directors (Nureyev, Baryshnikov, Martins, Dowell). Now we have 'the board'. `Apres moi le board', Balanchine is once reported to have said. The era of artistic policy by committee has arrived. But will it produce a horse or a camel?

One of the biggest problems which Peter Schaufuss faced and which Ivan Nagy will face is that of new work. For the current Coliseum season Schaufuss commissioned two new works from Christopher Bruce and Siobhan Davies. Bruce has worked with ENB before the Dancing Ledge was Davies's first work for a big, classical company. At first viewing it seemed rather bland and meandering but at the second performance the structure emerged more clearly as did the strength of the dancers' performances.

Since her Fulbright Fellowship to Amer- ica in 1987 Davies's choreography has made a sensuous exploration of space evident in works like Wyoming and White Man Sleeps. She has also become in- terested in minimalist music and the score of Dancing Ledge is by John Adams, composer of the opera Nixon in China. Two weeks ago during the ABT season we saw Twyla Tharp's In the Upper Room with music by the high priest of minimalism, Philip Glass. Tharp and Davies are both very musical choreographers but they have problems in trying to realise the variety of

musical texture in their choreography. Dancing Ledge is strongest in its double-

work, notably the final duet for Janette Mulligan and Martin James. None of the dancers yet manage to convey that sense of relaxed power which Davies demands but it was good to see them in choreography which tried to extend them.

It was love at second sight.' The revival of Ashton's Romeo and Juliet was one of the great achievements of Schaufuss's directorship. This work is also a challenge to the company, particularly the dazzling choreography for the men. Ashton didn't often have the chance to create virtuoso male choreography but in 1955, when this production was first cre- ated, he was working with some of the finest male dancers in Europe at the Royal Danish Ballet. It is evident from the choreography that Ashton relished the experience. The ENB men are trans- formed.