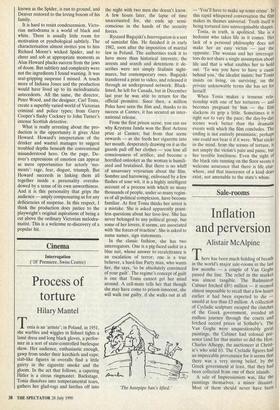 Tonia is an `artiste'; in Poland, in 1951, she warbles and wiggles in fishnet tights a lame dress and long black gloves, a perfor- mer in a sort of state-controlled burlesque show. Her audience, enthusiastic enough, gawp from under their kerchiefs and caps; slab-like figures in overalls find a little gaiety in the cigarette smoke and the gloom. In the act that follows, a capering Hitler is a circus ringmaster. Backstage, Tonia dissolves into temperamental tears, gathers her glad-rags and lurches off into

the night with two men she doesn't know. A few hours later, the lapse of time unaccounted for, she ends up semi- conscious in the hands of the security forces.

Ryszard Bugajski's Interrogation is a sort of samizdat film. He finished it in early 1982, soon after the imposition of marital law in Poland. The authorities took it to have more than historical interests; the arrests and search and detentions it de- scribes were not simply Stalinist night- mares, but contemporary ones. Bugajski transferred a print to video, and released it through an underground network. Black- listed, he left for Canada, but in December last year he was able to return for the official premiere. Since then, a million Poles have seen the film and, thanks to its success at Cannes, it has secured an inter- national release.

From the first prison scene, you can see why Krystyna Janda won the Best Actress prize at Cannes; but from that scene onwards — as she feeds her cigarette into her mouth, desperately drawing on it as the guards pull off her clothes — you lose all consciousness of artifice, and become a horrified onlooker as the woman is humili- ated and brutalised. But there is no whiff of unsavoury voyeurism about the film. Sombre and harrowing, enlivened by a few flashes of sour wit, it is a highly intelligent account of a process with which so many thousands of people, under so many regim- es of all political complexion, have become familiar. At first Tonia thinks her arrest is a mistake. She is asked apparently point- less questions about her love-live. She has never belonged to any political group, but some of her lovers, it seems, are associated with 'the forces of reaction'. She is asked to name names, sign statements.

In the classic fashion, she has two interrogators. One is a pig-faced sadist in a blue suit, whose answer to recalcitrance is an escalation of terror; one is a true believer, a hard-line Party man, who wants her, the says, `to be absolutely convinced of your guilt'. The regime's concept of guilt is one that Tonia cannot get her mind around. A cell-mate tells her that though she may have come to prison innocent, she will walk out guilty, if she walks out at all 'The hosepipe ban's lifted.'

— 'You'll have to make up some crime'. In this rapid whispered conversation the film makes its themes universal. Truth itself is being tortured into unrecognisable shapes.

Tonia, in truth, is apolitical. She is a hedonist who takes life as it comes. Her lack of a personal philosophy does not make her an easy victim — just the opposite. The woman and her interroga- tors do not share a single assumption about life and that is what enables her to hold out. `To win you have to have a cause behind you,' the idealist insists; but Tonia insists on living, on surviving, on the private unknowable terms she has set for herself.

When Tonia makes a tenuous rela- tionship with one of her torturers — and becomes pregnant by him — the film slackens its grip a little. Sometimes it is right not to vary the pace; the day-by-day scenes work better than the dramatic events with which the film concludes. The ending is not entirely pessimistic; perhaps one could not bear it if it were. What sticks in the mind, from the scenes of torture, is not simply the victim's pain and panic, but her terrible loneliness. Even the sight of the black rats running on the floor seems a welcome assurance that there is life else- where, and that innocence of a kind does exist, not amenable to the state's whim.