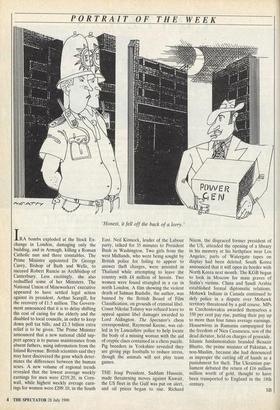 'Honest, it fell off the back of a lorry.'

IRA bombs exploded at the Stock Ex- change in London, damaging only the building, and in Armagh, killing a Roman Catholic nun and three constables. The Prime Minister appointed Dr George Carey, Bishop of Bath and Wells, to succeed Robert Runcie as Archbishop of Canterbury. Less excitingly, she also reshuffled some of her Ministers. The National Union of Mineworkers' executive appeared to have settled legal action against its president, Arthur Scargill, for the recovery of £1.5 million. The Govern- ment announced that it is to delay shifting the cost of caring for the elderly and the disabled to local councils, in order to keep down poll tax bills, and £3.3 billion extra relief is to be given. The Prime Minister announced that a new national child sup- port agency is to pursue maintenance from absent fathers, using information from the Inland Revenue. British scientists said they may have discovered the gene which deter- mines the differences between the human sexes. A new volume of regional trends revealed that the lowest average weekly earnings for men were £219.20, in Corn- wall, while highest weekly average earn- ings for women were £209.10, in the South

East. Neil Kinnock, leader of the Labour party, talked for 35 minutes to President Bush in Washington. Two girls from the west Midlands, who were being sought by British police for failing to appear to answer theft charges, were arrested in Thailand while attempting to leave the country with £4 million of heroin. Two women were found strangled in a car in north London. A film showing the violent death of Salman Rushdie, the author, was banned by the British Board of Film Classification, on grounds of criminal libel. Count Nikolai Tolstoy was refused leave to appeal against libel damages awarded to Lord Aldington. The Spectator's chess correspondent, Raymond Keene, was cal- led in by Lancashire police to help locate the body of a missing woman with the aid of cryptic clues contained in a chess puzzle. Pig breeders in Yorkshire revealed they are giving pigs footballs to reduce stress, though the animals will not play team games.

THE Iraqi President, Saddam Hussein, made threatening moves against Kuwait, the US fleet in the Gulf was put on alert, and oil prices began to rise. Richard

Nixon, the disgraced former president of the US, attended the opening of a library in his memory at his birthplace near Los Angeles; parts of Watergate tapes on display had been deleted. South Korea announced that it will open its border with North Korea next month. The KGB began to look in Moscow for mass graves of Stalin's victims. China and Saudi Arabia established formal diplomatic relations. Mohawk Indians in Canada continued to defy police in a dispute over Mohawk territory threatened by a golf course. MPs in Czechoslovakia awarded themselves a 550 per cent pay rise, putting their pay up to more than four times average earnings. Housewives in Rumania campaigned for the freedom of Nicu Ceausescu, son of the dead dictator, held on charges of genocide. Islamic fundamentalists branded Benazir Bhutto, the prime minister of Pakistan, a non-Muslim, because she had denounced as improper the cutting off of hands as a punishment for theft. The Ukrainian par- liament debated the return of £16 million million worth of gold, thought to have been transported to England in the 18th century.