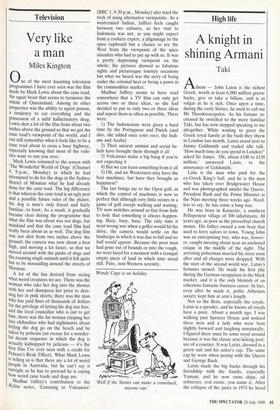 made by Mark Lewis about the cane toad, the squat beast that seems to tyrannise the whole of Queensland. Among its other properties was the ability to squirt poison,

a tendency to eat everything and the possession of a mild hallucinatory drug.

Lewis shot a lot of the film from about two inches above the ground so that we got the cane toad's viewpoint of the world, and I can still remember what it feels like to be a cane toad about to cross a busy highway, especially knowing that most of the vehi- cles want to run you over.

Mark Lewis returned to the screen with 'The Wonderful World of Dogs' (Channel 4, 9 p.m., Monday) in which he had attempted to do for the dogs in the Sydney district of Mosman what he had already done for the cane toad. The big difference is that whereas the cane toad is an ugly pest and a possible future ruler of the planet, the dog is man's only friend and fairly familiar, to boot. As a result, it gradually became clear during the programme that what the film was about was not dogs, but mankind and that the cane toad film had really been about us as well. The dog film was not shot from two inches above the ground; the camera was now about a foot high, and moving a lot faster, so that we moved around with the packs of dogs and the roaming single animals until it felt quite fun to be marauding around the streets of Mosman.

A lot of the fun derived from seeing what weird' creatures we are. There was the woman who take her dog into the shower with her and shampoos her prior to dres- sing her in pink shorts; there was the man who has paid fines of thousands of dollars for the privilege of letting his dog run free, and the local councillor who is out to get him; there was the fat woman clasping her tiny chihuahua who had nightmares about letting the dog go on the beach and be taken by pelicans (an excuse for a wonder- ful dream sequence in which the dog is actually kidnapped by pelicans — it's the first film I've ever seen with a credit for Pelican's Beak Effect). What Mark Lewis Is telling us is that there are a lot of weird People in Australia, but he can't say it outright so he has to pretend he is saying how weird cane toads and dogs are. Madhur Jaffrey's contribution to the Byline series, 'Listening to Volcanoes'

(BBC 1, 9.30 p.m., Monday) also tried the trick of using alternative viewpoints. As a westernised Indian, Jaffrey feels caught between two cultures, so her visit to Indonesia was not, as you might expect from a cookery expert, a pilgrimage to the spice cupboard but a chance to see the West from the viewpoint of the spice islanders who had to put up with us. It was a pretty depressing viewpoint on the whole; the pictures showed us fabulous sights and picturesque touristy occasions but what we heard was the story of being under the colonial heel or being a pawn in the commodities market.

1) The Indonesians were given a hard time by the Portuguese and Dutch (and also, she added once sotto voce, the Indi- ans and Arabs)

2) Their ancient animist and social be- liefs have brought them through it all 3) Volcanoes make a big bang if you're not expecting it 4) But we can learn something from it all 5) Oh, and we Westerners may have the best machines, but have they brought us happiness?

The last brings me to the Open golf, in which the control of machines is now so perfect that although very little occurs in a game of golf except walking and waiting, TV now switches around so fast from hole to hole that something is always happen- ing. Busy, busy, busy. The only time it went wrong was when a golfer would hit his drive, the camera would settle on the

landscape in which it was due to fall and no ball would appear. Because the poor man had gone out of bounds or into the rough,

we were faced for a moment with a tranquil empty piece of land in which time stood still. Pure, non-Western serenity.

'Well if the Stones can make a comeback, anyone can.'