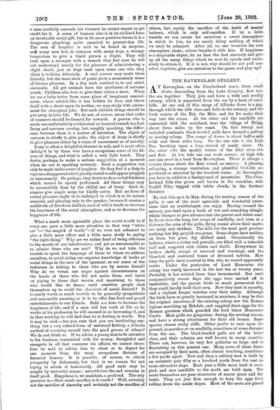 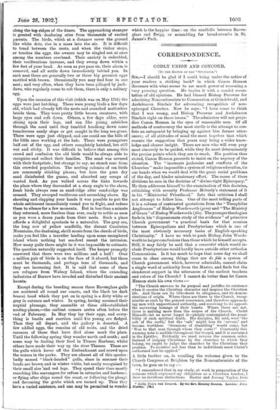 AT Ravenglass, on, the Cumberland coast, three small rivers, descending from the Lake Country, flow lute the sea together. They join and form a wide and muddy estuary, which is separated from the sea by a bank of sand- hills. At one end of this range of hillocks there is a gap, through whiCh the tide rises and falls in the estuary, and the fresh waters of the Esk, the Mite, and the Irt make their way into the ocean. At the other end the sandhills are connected with the mainland, near the village of Drigg, about three miles up the coast. On this breezy and secluded peninsula black-headed gulls have formed a gallery or nesting colony. The range of dunes is about half-a-mile wide and three miles long. On the one side is the Irish Sea, breaking upon a long stretch of sandy shore. On the other side the muddy waters of the tidal river ebb and flow. At low tide one can wade across ; at high tide one can cross in a boat from Ravenglass. There is always a certain charm about the flats round an estuary.. A pleasing colouring, a strange vegetation, and plentiful bird-life are produced or attracted by the brackish water. At Ravenglass you have in addition a background of mountains. The Cum- berland fells 'rise green and brown in the sunshine, with Bea-fell "Pite,-milipwil --with -white- - clouds, -in the furthest distance.

To visit this spot in May, during the nesting season of the galls, is one of the most agreeable and wonderful excur- sions that an ornithologist can enjoy. Having crossed the estuary, you land upon a bank of wet and crunching shingle, which changes as you advance into the purest and driest sand. In front rises the long, low range of sandhills, and even at a distance the cries of the gulls, flying round above their mates, are noisy and strident. The hills for the moat part produce nothing but dry, greyish sea-grass. Some slopes have nothing on them but pure, dry , drifted sand.. Occasionally the hollows, where a richer soil prevails, are filled with a tolerable turf and carpeted with violets and thrift. Everywhere lie broken shells, scraps of seaweed and wreckage, and the bleached and scattered bones of deceased rabbits. How long the gulls have resorted to this site, no record apparently exists. Under the protection of Lord Muncaster the colony has vastly increased in the last ten or twenty years. Probably it has existed from time iminemorial. But until comparatively recent days the eggs were carried off in basketfuls, and the parent birds so much persecuted that they could hardly hold their own. Now they nest in security, and a vigilant keeper watches over their safety. Although the birds have so greatly increased in numbers, it may be that the original ancestors of the existing colony saw the Roman legions marching up. Eskdale, and supplied fresh eggs for the Roman ganison which guarded the ford below Muncaster Castle. Most gulls are gregarious during the nesting season, and have a strong attachment for their old homes. Some species choose rocky cliffs. Other prefer to nest upon the ground, in marshes or on sandhills, sometimes at some distance from the sea. The black:headed gulls are of the latter class, and their colonies are well known in many counties. There can, however, be very few gulleries so large and so flourishing as this present one. Many acres of these dunes are occupied by their nests, often almost touching, sometimes a few yards apart. Now and then a solitary nest is built by an eccentric pair fifty or a hundred yards from the rest on some attractive slope. Each year a little more land is occu- pied, and new sandhills to the north are built upon. The nests themselves are poor structures of coarse grass and dry bents. They are just firm enough to keep the eggs from rolling down the sandy slopes. Most of the nests are placed

along the top ridges of the dunes. The approaching stranger is greeted with deafening cries from thousands of excited parents. The birds, which at a distance cover the ground like white dots, rise in a mass into the air. It is difficult to tread between the nests, and when the visitor stops, or touches the eggs. the owners may be singled out at once among the numbers overhead. Their anxiety is redoubled, their vociferations increase, and they swoop down within a few feet of your head. As soon as you pass on, their alarm is removed, and all settle down immediately behind you. In each nest there are generally two or three big greenish eggs mottled with brown. Occasionally you may find four in one nest; and very often, when they have been pillaged by jack- daws, who regularly come to rob them, there is only a solitary egg.

Upon the occasion of this visit (which was on May 17th) the eggs were just hatching. There were young birds a few days old, which had already left the nests and crouched motionless beside them. They were pretty little brown creatures, with large eyes and soft down. Others, a few d_91. re older, were strong upon their legs, and ran like young ostriches through' the sand until they tumbled headlong down some treacherous sandy slope or got caught in the long sea-grass. There were eggs just chipped, and one could see the bills of the little ones working at the hole. There were youngsters half out of the egg, and others completely hatched, but still wet and sticky. It was difficult to believe that among this crowd and confusion the old birds would be always able to recognise and collect their families. The sand was covered with their footprints ; but strange to say, no stench rose from this crowded population. The nesting colonies of sea birds are commonly stinking places ; but here the pure dry sand disinfected the guano, and absorbed any scraps of wasted food. As you walked across the links towards the place where they descended at a steep angle to the shore, fresh birds always rose as sand-ridge after sand-ridge was crossed. They swooped vociferous and screeching above. By shouting and clapping your hands it was possible to put the whole settlement immediately round you to flight, and reduce them to silence for a few moments. But in less than a minute they returned, more fearless than ever, ready to settle as soon as you were a dozen yards from their nests. Such a place affords a delightful spectacle to a naturalist. The grey sea, the long row of yellow sandhills, the distant Cumbrian Mountains, the deafening, shrill music from the clouds of birds, make you feel like a traveller landing upon some unexplored island where nothing but sea-fowl resent the intrusion. How many gulls there might be it was impossible to estimate. The question naturally suggested itself. The keeper promptly answered that there were two millions and a half ! Over a million pair of birds is on the face of it absurd, but there must be thousands, and perhaps tens of thousands, and they are increasing fast. It is said that some of them are refugees from Walney Island, where the extending industries of Barrow have invaded and disturbed their ancient haunts.

Except during the breeding season these Ravenglass gulls are scattered all round our coasts, and the black (or dark brown) hood which they put on in spring is a dirty white or grey in autumn and winter. In spring, having assumed their nuptial plumage, they assemble at these old-established nesting-places,—the earliest corners arrive often before the end of February. In May they lay their eggs, and every- thing is bustle and exertion until the young are fledged. Then they all depart, and the gallery is deserted. A few addled eggs, the remains of old nests, and the dried carcases of those that have died alone mark the place. Until the following spring they wander north and south ; and some may be finding their food in Thurso Harbour, whilst others have made their way up the river Thames. These are the gulls which hover off the Embankment and crowd upon the waters in the parks. They are almost all of this species : badly named "black-headed" gulls, since in summer their heads are brown and in winter white, but easily recognised by their small size 'and red legs. They spend their time mostly searching like scavengers for refuse in estuaries and harbours. or flying after ships round the coast, or following the plough and devouring the grubs which are turned up. Thus they have a varied existence, and one may be permitted to wonder

which is the happier time : on the sand hills between Raven- glass and Drigg, or scrambling for bread-crumbs in St. James's Park.