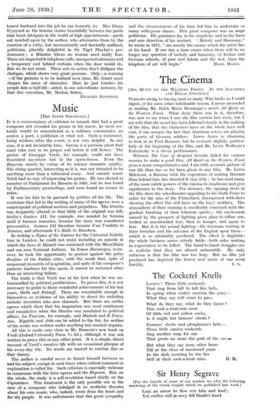 [ALL QUIET ON THE WEbTERN FRONT. AT THE ALHAMBRA AND REGAL CINEMAS.] PERHAPS owing to having read as many War books as I could digest, or for some other indefinable reason, I never succeeded in reading Mr. Erich Maria Remarque's novel All Quiet on . the Western Front. What story there was in it, therefore, was new to me when I saw the film version last week, but I am told that the novel has been followed closely in the making of the film, that the characters have on the whole been well cast, if one accepts the fact that American actors are playing the parts of German soldiers. Lewis Ayres is charming to look at as Paul Baumer, but he overacts slightly, particu- larly at the beginning of the film, and Mr. Lewis Wolheim's Katczinsky is a clever performance.

Whereas The Case of Sergeant Grischa failed for various reasons to make a good film, All Quiet on the Western Front gives a more comprehensive and,- I am told, accurate picture of war life than has so far been given in any film. 5Ir. Lewis Milestone, a Russian with the experience of making Russian films behind him, has directed it very ably : he has used many of the more subtle powers of the cinema to emphasize and give significance to the story. For instance, the opening shots in the film show the schoolmaster appealing to his Sixth Form to enlist for the sake of the Fatherland, interspersed with shots showing the effect this will have on the boys' mothers. The atmosphere of their training is excellently conveyed with the gradual breaking of their hilarious spirits ; the excitement caused by the prospect of fighting gives place to either con- trolled or uncontrolled fear, then to hunger, and again to fear. But it is the actual lighting—the Germans waiting in their trenches and the advance of the English upon them— which is so admirably produced. The effect is frightful : the whole business seems utterly futile—both sides waiting in expectation to be killed. The hand-to-hand struggles are so realistic that they are almost unbearable. My only criticism is that the film was too long. But no film yet produced has depicted the horror and waste of war more