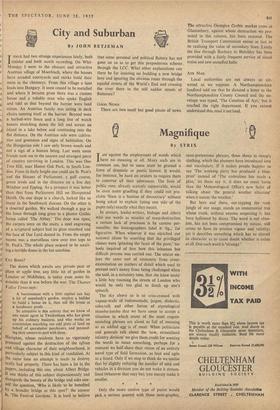 THAVE had two strange experiences lately, both sinister and both worth recording. On Whit- Monday I went to the obscure and attractive Austrian village of Moerbisch, where the houses have arcaded courtyards and storks build their nests in the chimneys. From this village a lane leads into Hungary. It soon ceased to be metalled and where it became grass there was a eustom house and a voluble man who spoke English and told us that beyond the barrier were land mines. An Austrian family was sitting in deck chairs sunning itself at the barrier. Beyond were a barbed-wire fence and a long line of watch towers stretching down the hill and across an island in a lake below and continuing into the flat distance. On the Austrian side were cultiva- tion and greenness and signs of habitation. On the Hungarian side I saw only brown ,weeds and not a sign of a human being. Last week some friends took me to the nearest and strangest piece of country surviving in London. This was One Tree Hill, near Honor Oak Park, in South Lon- don. From its leafy height one could see St. Paul's and the Houses of Parliament, a golf course, green levels and in the distance on a fine day Windsor and Epping. As a prospect it was better than that from Parliament Hill on Hampstead Heath. On one slope is a church, locked like so many in the Southwark diocese. On the other is a deserted garden. We walked through a gap in the fence through long grass to a plaster Gothic house called The Abbey.' The door was open, the carpets were on the stairs, a steel engraving of a scriptural subject had its glass smashed and the face of Our Lord dented in. From the empty rooms was a marvellous view over tree tops to St, Paul's. The whole place semed to be await- ing a terrible doom in the hot sunshine.

The doom which awaits any private pear or Plum or apple tree, any little bit of garden in London or Middlehex, is today even more in- evitable than it was before the war. The Thames Valley Times says : A businessman with a little capital can buy a bit of somebody's garden, employ a builder to build a house on it, then sell the house at

a handsome profit. . . . So attractive is this activity that we know of one estate agent in Twickenham who has given up his ordinary business, and who works on commission searching out odd plots of land on behalf of speculative purchasers, and persuad- ing their owners to part with them.

Hampton, whose residents have so vigorously Protested against the destruction of the sylvan and village character of their neighbourhood, is Particularly subject to this kind of vandalism. At the same time no attempt is made to destroy really bad property. There has been a lot in the papers, including this one, about Albert Bridge. If one thinks of this subject dispassionately and disregards the beauty of the bridge and asks one- self the question, 'Who is likely to be benefited by a broader bridge at this spot?' the answer is, 'The Festival Gardens.' It is hard to believe

that some personal and political flattery has not gone on so as to get this preposterous scheme-. through the LCC. What other explanations can there be for insisting on building a new bridge here and ignoring the obvious route through the squalid streets of the World's End and crossing the river there to the still sadder streets of Battersea?

There are two small but good pieces of news. The attractive Georgian Gothic market cross at Glastonbury, against whose destruction we pro- tested in this column, has been restored. The British Transport Commission seems at last to be realising the value of secondary lines. Lately the line through Banbury to Bletchley has been provided with a fairly frequent service of diesel trains and new unstaffed halts.

Local authorities are not always so nit- witted as we suppose. A Northamptonshire landlord told me that he dictated a letter to the Northamptonshire County Council and the en- velope was typed, The Countess of Ayr,' but it reached the right department. If you cannot understand this, read it out loud.