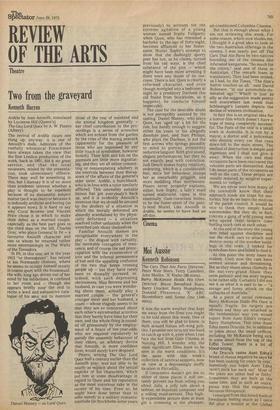 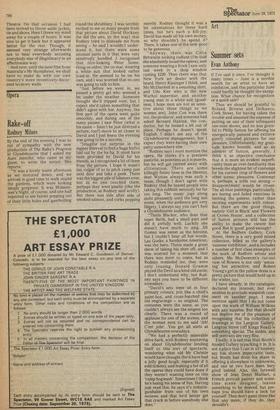 It was the warm weather that kept me away from the films you ought to be told about this week. One of them, you will be glad to know, is built around Italian left-wing politics. I promise not to to try too hard to catch up with it, even when I can face the hot little Gate Cinema at Notting Hill. I wonder why the most significant films have to be seen in the worst conditions. It's the same with this week's collection of satirical snippets, now on view at a depressingly stuffy location in Piccadilly.

If conscience doesn't get me to either of these places it .will certainly prevent me from telling you about Julie, a jolly tale about a lesbian, an impotent composer and a willing maid-servant. This highly-expendable picture does at least get a screening at the pleasant, air-conditioned Columbia Cinema.

But that is enough about what I am not reviewing this week. For some reason, which now eludes me, I thought it a good idea to look at the two Australian offerings in the cinema. I was nearly put off The ' Cars That Ate Paris by two natives • bounding out of the cinema like infuriated kangaroos. "So much for the critics," said one of them in . Australian. (The remark loses in translation). They had been misled, as I had, by the Times. "The film's horror touches us all," said David Robinson, "in our automobile-dominated age." Which is just as silly as the suggestion made pretty well everywhere last week that Schlesinger's Locusts depicts the • decline of western civilisation.

In fact this is an original idea for a horror-film which doesn't have a hope of being completely successful. The Paris of the title is a small town in Australia. It is run by a mayor, a doctor and a policeman who destroy every car that runs down-hill to the main street. The method of destruction is simple and ingenious and I shall not give it away. When the cars and their occupants have been recovered the valuable parts are dismantled. And I do mean parts of the occupants as well as the cars. These people are usually reduced, by surgical experiments, to 'vedges'.

We are never sure how many of the townsfolk know that their approach roads are traps for motorists. Nor do we learn the motives of the parish council. It would be nice to think they simply hated automobiles. But they do, in fact, tolerate a gang of wild young men who spend their leisure time hurling stock cars at each other.

At the end of the story the young men rebel against discipline and use the stock cars to attack and destroy many of the wooden buildings in the town. I looked for symbolism here and failed to find it.

At this point the story loses its realism. Until now the cars have .seemed sinister and threatening. But as they shunt about clumsily in the not-very-grand finale they seem pathetic and the story begins to be rather silly. Certainly I did not see it as what it is said to be — "a savage and funny attack on the outbacks of Australia."

As a piece of social comment Barry McKenzie Holds His Own is equally fragile. Its targets are obvious and they are attacked in the rumbustious way you would expect from Aunt Edna's creator: Barry Humphries. This time Aunt Edna meets Dracula. So, in addition to jokes about the usual orifices, including Mr McKenzie being sick in some detail from the top of the Eiffel Tower, there is a lot of blood-letting.

As Dracula tastes Aunt Edna's brand of rhesus negative he says he has been looking for years 'in vein', Somebody else hopes Aunt Edn4 'won't stick her neck out'. Most of the jokes are either bad or filthy'. Sometimes they are both at the same time, and in such an outrageous way that the experience becomes therapeutic.

Theatre. On that occasion I had been invited to throw aside jacket; tie and shoes. Here I threw my mind away for a couple of hours. It was nice to get it back but it appeared better for the rest. Though, it seemed very strange afterwards not to hear everybody accusing everybody else of illegitimacy in an affectionate way.

And now, until the next film from Australia's Mr Humphries, we shall have to make do with our own country's more inventively-decorated lavatory walls.