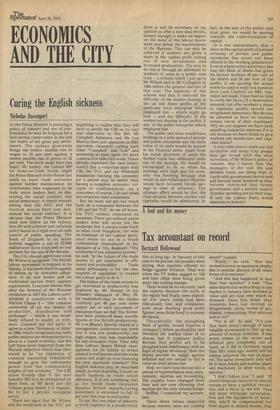 ECONOMICS AND THE CITY

As the Prime Minister is pursuing a policy of consent and not of confrontation he may be forgiven for a face-saving compromise in the last (we hope) of the great pay settlements. The railway give-away brings the twelve months rise in wages to 35 per cent against a twelve months rise in prices of 22 per cent. The buck stops here (we hope). Mr Ashley, the Labour MP tor Stoke-on-Trent South, urged the Prime Minister in the House last week to warn trade unionists against further manipulation by communists who happened to be trade union leaders bent on destroying the social contract and social democracy. A timely remark seeing that the AEU and the Scottish miners have just denounced the social contract. It is obvious that the Prime Minister must now follow up the railway face-lift with a fiercer anti-inflation policy based on a rigid over-all cash control of public spending. The Bank of England in its latest bulletin suggests a cut of £2,000 million over three years and no real increase for the rest of the decade.

The City should appreciate what Mr Wilson is up against. The British labour movement is trapped in its history. It has made itself incapable of reform by its obstinate adherence to its rule books and its traditional united front against exploitation. Everyone knows that after the ferment of the Russian revolution in 1917 the Labour party adopted a constitution with a Marxist Clause 4 "the common ownership of all the means of production, distribution and exchange" which it has steadfastly refused to modify or withdraw. Gaitskell got the party to agree to a new 'Statement of Aims' in 1960, which recognised that both public and private enterprise have a place in a mixed economy, but the Left have never departed from the Marxist objective which was then stated to be "an expansion of common ownership substantial enough to give the community power over the commanding heights of the economy." The CBI states frankly that if the new Industry Bill is to be interpreted on these lines, as Mr Benn and the Tribune group desire, it is impossible to run a private enterprise sector. .

There are signs that Mr Wilson and the moderates in the TUC are beginning to realise that they will have to satisfy the CBI on its very real objections to this Bill. Mr Campbell Adamson and Mr Len Murray have just appeared on BBC television chummily calling each other "Campbell" and "Len" and promising to meet again for more constructive talks this week. I have already expressed the view (reluctantly) that a corporate state with CBI, the TUC and the Whitehall mandarins running the economy for a period may be better than having a complete economic collapse or confrontation. As a consumer, of course, I do not relish the corporate state consensus.

But we must not pin too much faith on a consensus between the CBI and the TUG. As we all know, the TUC cannot command its members. There are militant union leaders who will never toe the moderate line. I always come back to what Lord Houghton, the wise ex-chairman of the Labour party, once wrote to me in a frank confessional (reproduced in my Memoirs of a City Radical): "The weakness of our industrial system," he said, "is the failure of the trade unions to get interested in efficiency and profitability . . Trade union philosophy is for the destruction of capitalism: it created the Labour party to do it."

The failure of the trade unions to get interested in productivity was deplored by Mr Healey in his Treasury statement of May 25. He mentioned that in the 'sixties Germany got 40 per cent more output out of each increment of resources than we did! The Economist later produced more horrific figures of low British productivity. Mr Len Murray bravely stated at a management conference last week that it was low productivity, not high wages, that was responsible for our economic crisis. Then why does Labour blame British management for its failure to invest when it is well known that the trade unions will insist on over-manning the new machines installed? The English sickness may be described simply as over-manning. It is not so much laziness as trade union obstinacy. It is not surprising that as the world trade recession deepens British manufacturing investment is estimated to fall 15 per cent this year in real terms.

To get the two sides of industry to work together in a productivity drive it will be necessary in my opinion to offer a new deal revolutionary enough to make an impact on the mind of the labour movement and defeat the machinations of the Marxists. This can only be achieved if workers are given a share in the capital profit arising out of new investment and increased productivity. The way to do this is through an allotment to workers of units in a public unit trust a scheme which I put up to Mr Wilson and to Mr Callaghan in 1964 before the general election of that year. The ingenuity of this scheme was that it removed the difficulty of the worker sharing in the up and down profits of the particular local enterprise which employed him which might go bust and the difficulty of the worker not sharing in the profits, if any, of the public enterprise which employed him.

The public unit trust would have holdings in a wide spread of private and public enterprise and the daily value of its units would be quoted in the financial press. Apart from his initial allotment of units the worker could buy additional units out of his savings. He would be encouraged to do so when his earnings were high and the economy was booming because that would be anti-inflationary (Keynes would have favoured forced savings in time of inflation). The ultimate effect would be that the class division between worker and capitalist would be eliminated. In fact, as the size of the public unit trust grew, we would be moving towards the collectivisation of capital.

Is it not extraordinary that a share in the capital profit of a mixed economy of private and public enterprise has never yet been offered to the working population? Even in a benevolent autocracy like Iran the Shah of Shahs has given his factory workers 49 per cent of the shares and 20 per cent of the profits. (I am quoting the actual words he used in reply to a question from Lord Chalfont on BBC television last week; I have had no time to verify the facts.) If a benevolent autocrat can offer workers a share in capitalist profits should not enlightened democracy like Britain be ashamed to have its workers remain slaves of their machines? Why do you suppose we have such appalling industrial relations if it is not because we have failed to give workers job satisfaction and capitalist status?

It may take time to work out this revolution and many City people may get bored with the slow movement of Mr Wilson's policy of consent. But I know that the managers of the vast life and pension funds are being kept in touch with government moves and will become more invested as they become convinced that firmer government and a stricter control of public spending are on their way-. If only the Labour Party would abandon its history!