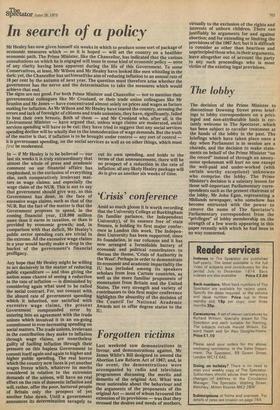 The decision of the Prime Minister to discontinue Downing Street press briefings to lobby correspondents on a privileged and non-attributable basis is certainly welcome to The Spectator, which has been subject to cavalier treatment at the hands of the lobby in the past. The briefings which have taken place once a day when Parliament is in session are a charade, and the decision to make statements on behalf of the Prime Minister "on the record" instead of through an anonymous spokesman will hurt no one except the well-paid and under-worked (with certain worthy exceptions) unknowns who comprise the lobby. The Prime Minister's decision is a salutary lesson for those self-important Parliamentary correspondents such as the present chairman of the lobby, Mr John Egan, representing a Midlands newspaper, who somehow has become entrusted with the power to emove the name of The Spectator's Parliamentary correspondent from the "privileges" of lobby membership on the strength of a few words appearing in this paper recently with which he had been in no way concerned.