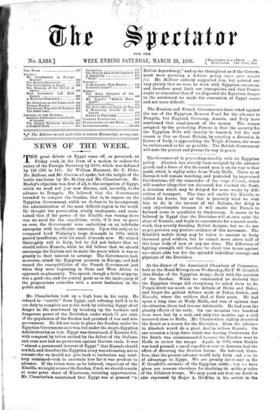 • THE great debate on Egypt came off, as promised, on

Friday week, in the form of a motion to reduce the salary_of the Foreign Secretary by 2100, which was defeated by 143 (288 to 145). Sir William Harcourt, Sir C. Dilke, Mr. Balfour, and Mr. Curzon all spoke, but the weight of the battle was borne by Mr. Morley and Mr. Chamberlain. Mr. Morley's objection was, first of all, to the occupation of Egypt, which we need not just now discuss, and, secondly, to the advance to Dongola. He believed that the Government intended to conquer the Soudan, that is, to impose on the Egyptian Government, which we declare to be incompetent, the administration of the most difficult region in the world. He thought the provocation wholly inadequate, and main- tained that if the power of the Khalifs was waning there was no need for the expedition, while, if it was as great as ever, the Government were embarking on an indefinite enterprise with insufficient resources. Upon this subject be compared Lord Wolseley's large demands in 1884, which proved insufficient, with his small demands now. He wished thoroughly well to Italy, but he did not believe that we should relieve Kassala, while he did believe that we should • encourage the Italians not to make the peace which it was so greatly to their interest to arrange. The Government had, moreover, raised the Egyptian question in Europe, and bad roused the susceptibilities of the French Government just when they were beginning in Siam and West Africa to approach us pleasantly. The speech, though a little snippety, -was a good one, and the central point as to the inadequacy of the preparations coincides with a secret hesitation in the public mind.