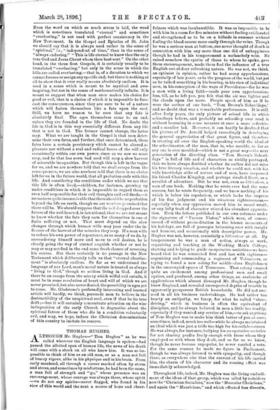 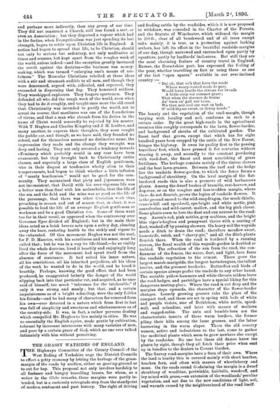 ALTHOUGH Mr. Hughes—" Tom Hughes" as he was called wherever the English language is spoken—had passed the allotted span of human life, the news of his death will come with a shock on all who knew him. It was so im- possible to think of him as an old man, or as a man not full of breezy vigour, alike in his physique and in his brain. From early manhood, all through a career marked often by storm and stress, and sometimes by misfortune, he had been the same, a man full of strength and "go," whose presence was an encouragement, whose courage was always there, whose spirit —we do not say spirits—never flagged, who found in his view of this world and the next a source of hope and cheer- fulness which was inexhaustible. It was as impossible to be with him in a room for five minutes without feeling exhilarated and strengthened as to be on a hillside in summer without feeling the blood coarse more easily through the veins. Thouglt he was a serious man at bottom, one never thought of death in connection with him any more than one did of unhappiness, though he had in his temperament a melancholy vein. He raised somehow the spirits of those to whom he spoke, gave them encouragement, made them feel the influence of a true English out-of-door refreshing nature. He was not, we think, an optimist in opinion, rather he had many apprehensions, especially of late years, as to the progress of the world, but yet as he talked something in his bearing, in his view of individual men, in his conception of the ways of Providence—for he was a man with a living faith—made your own apprehensions less, till, as he left you, you felt that the air was lighter and the clouds upon the move. People speak of him as if he were the author of one book, "Tom Brown's Schooldays,' and no doubt that was a remarkable performance. It is still, after forty years, the only picture of school life in which. schoolboys believe, and probably no schoolboy ever read it without becoming in some measure at once a more reflective and a manlier lad. Moreover, it can hardly be doubted that his picture of Dr. Arnold helped exceedingly in developing the general appreciation of that great figure, and therefore' in creating all over the English-speaking world the ideal of the schoolmaster, of the man, that is, who moulds, so far an one is ever moulded—which is not a great way—the next generation of the directing class. "Tom Brown's School- days" is full of life and of characters so vividly portrayed, that we have always doubted whether its author did not miss his true literary vocation, and whether he could not, with his wide knowledge alike of nature and of men, have surpassed his friend Charles Kingsley, and perhaps rivalled Scott, as a novelist of adventure. But he was not., even as litteratear, a man of one book. Nothing that he wrote ever had the same success, but he wrote frequently, and we know nothing of his which is below his reputation, or which lacks the impress of his fine judgment and his vivacious righteousness,— especially when any oppression moved him to moral wrath, or any lofty trait of character stirred his abundant apprecia- tion. Even the letters published in our own columns under the signature of " Vacuus Viater," which were, of course, tossed off without premeditation in the leisure moments of his holidays, are full of passages brimming over with insight and humour, and occasionally with descriptive power. Mr. Hughes was not, however, essentially a litUrateur at all. By temperament he was a man of action, always at work, organising and teaching at the Working Men's College, starting and helping to guide co-operative societies—we have heard that he was connected first and last with eighteen— organising and commanding a regiment of Volunteers, or trying to found a new colony for middle-class Englishmen in the unoccupied spaces of Tennessee. That colony created quite an excitement among professional men and small squires, and produced, among other things, an avalanche of applications which almost dismayed Mr. Hughes, though he knew England, and revealed unsuspected depths of trouble in apparently prosperous British households. He did not suc- ceed in all his business undertakings. He had rather too hearty an antipathy, we fancy, for what he called "slave- driving," which in business is often the equivalent of discipline, and he always believed in men a little too readily, especially if they wanted any service of him,—to ask anything of Tom Hughes was to make him think better of you at once, sometimes, indeed, much too well—while he always maintained an ideal which was just a trifle too high for his collaborateurs He was always, for instance, bullying his co-operative societies for not sharing profits freely enough with those whom they employed or with whom they dealt, and so far as we know, though he never became unpopular, he never carried a vote. For the same reasons he made no figure in Parliament, though he was always listened to with sympathy, and though there, as everywhere else that the current of his life carried him, the charm of his character and its rousing effect was immediately acknowledged.

Throughout life, indeed, Mr. Hughes was the living embodi- ment of the ideas of that group, which was ;ailed by outsiders now the "Christian Socialists," now the "Muscular Christians," and again the " Mauricians," and which effected less directle. and perhaps more indirectly, than any group of our time. They did not construct a Church, still less found a sect, or even an Association ; but they dispersed a vapour which had in the forties, when Evangelicalism was just spending its last strength, begun to settle upon Christian life in England. A notion had begun to spread that life, to be Christian, should .not only be serious but sedentary, not only meditative at times and seasons, but kept apart from the rougher work of the world, unless indeed—and the exception greatly increased the revolt against the doctrine—the business was money- making, which was termed "enlarging one's means of use- fulness." The Muscular Christians rebelled at these ideas with a stir and stramash audible to all men, and though they were denounced, argued with, ridiculed, and reproved, they succeeded in dispersing that fog. They honoured soldiers. They worshipped explorers. They forgave sportsmen. They defended all who did the rough work of the world, even when they had to do it roughly, and taught once more the old creed that Christianity was intended to purify the world, not to arrest its course, that manliness was one of the foundations of virtue, and that a man who shrunk from his duties in the name of Christ would assuredly be rejected by his master. With T. Hughes and Charles Kingsley and J. M. Ludlow, and many another, to express their thoughts, they soon caught the public ear, and though, as we have said, they founded no school, and for themselves assumed no distinctive name, the -impresssion they made and the change they wrought was deep and lasting. They not only arrested a tendency towards effeminacy which probably would in any case have been evanescent, but they brought back to Christianity entire classes, and especially a large class of English gentlemen, who in their disgust at tendencies wholly alien to their temperaments, had begun to think whether a little infusion of "manly heathenism" would not be good for the com- munity. They maintained that piety and joyousness were not inconsistent, that David with his over-vigorous life was -a better man than Saul with his melancholia, that the life of the sea and the field and the mine was as good as the life of the parsonage, that there was other Curistian work than preaching in season and out of season, that, in hhort, it was possible to lead the life of an average English gentleman or workman and be a good Christian too. Some of them went too far in their recoil, as appeared when the controversy over Governor Eyre divided all England ; but in the main their ideas acted as a brisk breeze acts upon a sultry day, clearing away the haze, restoring health to the sickly and vigour to the exhausted. Of this movement Hughes was not the soul, for F. D. Maurice, with his saintliness and his sense, must be called that ; but he was in a way its life-blood,—he so visibly lived the whole doctrine, lived it heartily and enjoyingly long after the force of the movement had spent itself from the absence of resistance. It had suited his inner nature, all his convictions, all his inherited prejudices, all his ideas of the work he wanted to do in the world, and he loved it heartily. Perhaps, knowing the good effect that had been produced, he exaggerated latterly the danger of the world slipping back into that particular rut, and acquired, as he once said of himself, too much "tolerance for the intolerable," if only it was strong and manly ; but that, and a certain impulsiveness as of a bright schoolboy, were the only foibles his friends—and he had many of characters far removed from his own—ever detected in a nature which from first to last was full of simplicity and sweetness and wholesomeness as of the country-side. It was, in fact, a rather perverse destiny which compelled Mr. Hughes to live mainly in cities. He was so essentially the English squire, made gentle by cultivation, tolerant by incessant intercourse with many varieties of men, and pure by a certain grace of God, which no one ever talked -intimately with him without perceiving.