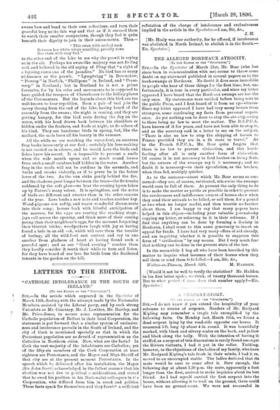 "CATHOLIC INTOLERANCE IN THE SOUTH OF IRELAND."

[To TIIR EDITOR OF TER " SPECTATOR."] SIR,—In the article which appeared in the Spectator of March 14th, dealing with the attempt made by the Nationalist Members, assisted by the Liberal party, and by such strong Unionists as Mr. Courtney, Mr. J. Lowther, Mr. Bartley, and Mr. Price-Jones, to secure some representation for the Catholic population of Belfast in their local Corporation, the statement is put forward that a similar system of exclusive- ness and intolerance prevails in the South of Ireland, and the city of Cork is mentioned specially as that in which the Protestant population are as devoid of representation as the Catholics in Northern cities. Now, what are the facts? In Cork the vast majority of the inhabitants are Catholics ; yet of the fifty-six members of the Cork Corporation at least eighteen are Protestants, and the Mayor and High Sheriff of that city are at the present moment Protestants. In the speech which be delivered after his installation, the Mayor (Sir John Scott) acknowledged in the fullest manner that his elfction was not due to political cunsiderations, and stated that he owed his position to his Nationalist colleagues in ti e Corporation, who differed from him in creed and politics. These facts speak for themselves, and they f arnieu a sufficient refutation of the charge of intolerance and exclusiveness implied in the article in the Spectator.—I am, Sir, Ac.,

[Mr. Healy was our authority, for he offered, if intolerance was abolished in North Ireland, to abolish it in the South.— Spectator.]