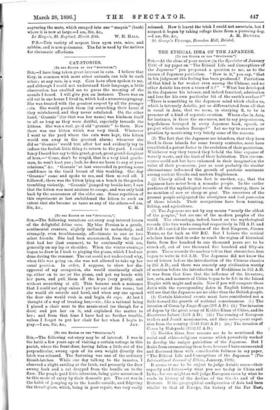 [To THE EDITOR OP THE • SPECTATOR:9 Sin,—The following veracious

cat-story may interest lovers of the delightful feline race. My blue Persian is a gentle, sentimental creature, slightly inclined to melancholy, and strangely, even troublesomely, affectionate to one or two select friends. She had been accustomed, from the time I first had her (last summer), to be continually with me, generally on my lap or shoulder. When the winter evenings began to draw in I took to playing the piano, which I bad not done during the summer. The cat could not understand why, when this was going on, she was not allowed to take up her usual position. In order, I suppose, to show her dis- approval of my occupation, she would continually climb up, either on to me :or the piano, and pat my hands with her paws, and pull ,them off the keys (very gently, and without scratching at all). This became such a nuisance that I could not play unless I put her out of the room; but she would sit outside and howl, and when any one opened the door she would rush in and begin da capo. At last I thought of a way of treating her,—viz, like a rational being I placed a chair next to the music-stool (as though for a duet) and put her on it, and explained the matter to her ; and from that time I have had no further trouble, unless I forget to put her chair for her when I begin to