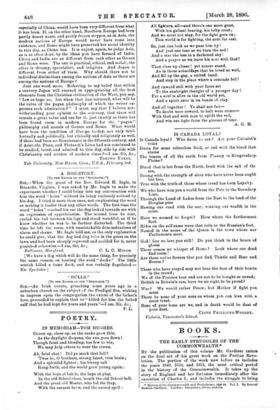 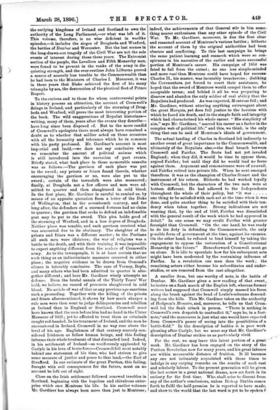 THE EARLY STRUGGLES OF THE COMMONWEALTH.*

BY the publication of this volume Mr. Gardiner enters on the final act of his great work on the Puritan Revo- lution. The portion of the work now before us includes the years 1649, 1650, and 1651, the most critical period in the history of the Commonwealth. It takes up the story of England and her fortunes immediately after the execution of Charles I., and includes the struggle to bring • History of the Commonwealth and Protectorate. 1649.60. Vol. I. By Samuel Rawson Gardiner. London : Longman, Omen, and Co.

the outlying kingdoms of Ireland and Scotland to own the authority of the Long Parliament,—or what was left of it. This volume, therefore, is no wise deficient in warlike episodes,—it includes the sieges of Drogheda and Wexford, the battles of Dunbar and Worcester. But the last scenes in the long-drawn-out tragedy of the Civil War are not the sole events of interest during these three years. The Extremist section of the people, the Levellers and Fifth Monarchy men, were found to be present in the ranks of the army in dis- quieting strength, and the ever-restless John Lilburne proved a source of scarcely less trouble to the Commonwealth than he had been to the Ministers of Charles I. Moreover, it was in these years that Blake achieved the first of his many triumphs by sea, the destruction of the piratical fleet of Prince Rupert.

To the curious and to those for whom controversial points in history possess an attraction, the account of Cromwell's doings in Ireland, and particularly of the storming of Drog- heda and Wexford, will prove the most interesting portion of the book. The wild exaggerations of Royalist historians— writing, many of them, years after the events they describe— have long since been disposed of. But to the more candid of Cromwell's apologists there must always have remained a doubt as to whether that soldier acted on those occasions with all the humanity and tolerance which he in common with his party professed. Mr. Gardiner's account is most imp irtial and lucid,—we dare not say conclusive when we remember the amount of political animus which is still introduced into the narration of past events. Briefly stated, what took place in those memorable assaults was as follows :—The garrison of each place was put to the sword ; any priests or friars found therein, whether encouraging the garrison or no, were also put to the sword ; certain of the townsfolk were also massacred ; finally, at Drogheda not a few officers and men were ad- mitted to quarter and then slaughtered in cold blood. In the first place, Mr. Gardiner is careful to remind us, by means of an apposite quotation from a letter of the Duke of Wellington, that in the seventeenth century, and for long after, the defenders of a stormed fortress had no claim to quarter ; the garrison that seeks to defend an indefensible post may be put to the sword. This plea holds good of the storming of Wexford, and in a leas degree of Drogheda. Neither place was tenable, and each garrison received what was accounted due to its obstinacy. The slaughter of the priests and friars was a different matter ; to the Puritans all such men were idolaters ; the war of religions was a battle to the death, and with their training it was impossible to expect anything different from the zealots of Cromwell's army. As to the townspeople, it is at least certain that no such thing as an indiscriminate massacre occurred in either place ; the negative evidence to be drawn from Ormond's silence is tolerably conclusive. The case of Verney, Boyle, and many others who had been admitted to quarter is alto- gether different ; and here Mr. Gardiner wisely attempts no defence. Even the brutal annals of the Thirty Years' War hold, we believe, no record of prisoners slaughtered in cold blood. No article of war of that or any previous age sanctions such a proceeding. Together with the killing of the priests and friars aforementioned, it shows by how much sharper a rule men were then wont to judge delinquencies and rebellion in Ireland than in England or Scotland. Cromwell must have known that the men before him had no hand in the Ulster Massacre of 1641; yet he affected to treat them as criminals caught red-handed. In his treatment of Ireland, and the men he encountered in Ireland, Cromwell in no way rose above the level of his age. Englishmen of that century scarcely con- sidered Irishmen as fellow human beings, and this feeling informs their whole treatment of that distracted land. Indeed, in his settlement of Ireland—so vociferously applauded by Carlyle in his love of brute force—Cromwell fell most notably behind one statesman of his time, who had striven to give some measure of justice and peace to that land,—the Earl of Strafford. In our estimate of the great Puritan, this failing, fraught with evil consequences for the future, must on no account be left out of sight.

Close on the Irish settlement followed renewed troubles in Scotland, beginning with the hopeless and chivalrous enter- prise which coat Montrose his life. In his earlier volumes Mr. Gardiner has always been more than just to Montrose; indeed, the achievements of that General stir in him some- thing nearer enthusiasm than any other episode of the Civil War. To Mr. Gardiner, moreover, is due the first clear and reasoned account of Montrose's various battles ; hitherto the account of them by the original authorities had been obscure and conflicting. To this last campaign he brings the same patient learning and research which were so con- spicuous in his narrative of the earlier and more successful portion of Montrose's career. His campaign of 1650 was fated to fail from the outset ; no one less simple-minded and more rusg than Montrose could have hoped for success

Charles II., his master, was incurably treacherous ; disliking the Covenanters, yet forced to court their assistance, he hoped that the sword of Montrose would compel them to offer acceptable terms; and behind it all he was preparing to disavow and abandon the only soldier of real ability that the Royalists had produced. As was expected, Montrose fell ; and Mr. Gardiner, without uttering anything extravagant about the great Marquis, yet does full justice to the heroism with which he faced his death, and to the simple faith and integrity which had characterised his whole career. His simplicity of aim," says Mr. Gardiner, "marred his career as a factor in the complex web of political life," and this, we think, is the only thing that can be said of Montrose's ideals of government.

The actual landing of Charles in Scotland led indirectly to another event of great importance to the Commonwealth, and ultimately of the Royalists also,—the final breach between Cromwell and Fairfax. The Scots had not yet invaded England ; when they did, it would be time to oppose them, argued Fairfax; but until they did he would lead no force against them. Argument and remonstrance were of no avail, and Fairfax retired into private life. When he next emerged therefrom it was as the champion of Charles Stuart and the instrument of his return. Hitherto he had worked loyally with Cromwell, but the characters of the two men were at bottom different. He had adhered to the Independents throughout the whole of their policy, but "it was one thing to be satisfied with each act at the time when it was done, and quite another thing to be satisfied with their ten- dency when taken together. Strong indications are not wanting that, by the end of 1648, Fairfax was dissatisfied with the general result of the work which be had approved in detail." In one sense we may credit Fairfax with greater foresight than Cromwell. "On the one hand, he was ready to do his duty in defending the Commonwealth, the only possible form of government at the time, against its enemies. On the other hand, he refused to bind himself by taking the engagement to oppose the restoration of a Constitutional Monarchy in the future." Henceforward Cromwell must go on alone. It is idle to speculate how far his subsequent acts might have been moderated by the restraining influence of Fairfax. In a revolution one man does the work ; the remaining actors either become his subordinates and under- studies, or are removed from the cast altogether.

A smaller item, but one worthy of note, is the battle of Dunbar. Mr. Gardiner gives a new reading of that event; be insists on a flank march of the English left, whereas former writers had supposed that Cromwell simply massed his force along the brook against the head of Leslie's columns descend- ing from the hills. This Mr. Gardiner takes on the authority of Hodgson's Memoirs, and, moreover, he tells us that Crom- well led the flank attack in person. "There is nothing in Cromwell's own despatch to contradict it," says he, in a foot- note," and the manceuvre is just what one would have expected from Cromwell's power of seeing into the possibilities of a battle-field." In the description of battles it is poor work gleaning after Carlyle, but we must say that Mr. Gardiner's description of Dunbar strikes us as particularly vivid.

For the rest, we may leave this latest portion of a great work. Mr. Gardiner has been engaged on the story of the Puritan Revolution now for many years, and his great labours are within measurable distance of fruition. It ill becomes any one not intimately acquainted with those times to indulge in any carping remarks on the results of such vast and scholarly labour. To the present generation will be given the last scenes in a great national drama, now set forth in its entirety for the first time. Who shall arise to dissent from any of the author's conclusions, unless Bishop Stubbs comes forth to fulfil the half-promise he is reported to have made, and show to the world that the last word is yet to be spoken P