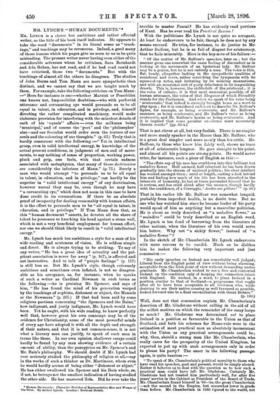 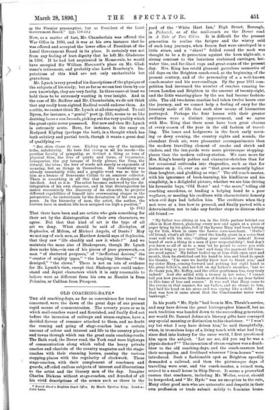 ambitions and rather affected writer, as the title of his book itself indicates. He appears to take the word " documents " in its literal sense as "teach- lags," and teachings may be erroneous. Indeed, a, good many of those lessons which his pages give us seem to us to be quite misleading. The present writer never having seen either of the considerable actresses whom he criticises, Sara Bernhardt and Ada Rehan, has not read, and if he had read could not have criticised, those two "documents." But with the teachings of almost all the others he disagrees. The studies of John Burns and Tom Mann are more sympathetic than distinct, and we cannot say that we are taught much by them. For example, take the following criticism on Tam Mann: —" Here for instance is one—whether Marxist or Possibilist one knows not, Impossibilist doubtless—who with perfervid utterance and coruscating eye would persuade us to be all equal in talent, in education, and in privilege, and, himself directing the rather complicated machinery, would make elaborate provision for interfering with the minutest details of each of his equals" affairs — even the milkman being 'municipal,' and of course the 'poet' and the 'philosopher' also—and our Socialist would order even the texture of our souls and the colouring of our thoughts." (p. 63.) Truly that is hardly consistent with the following :—" Yet in intellectual grasp, even in valid intellectual energy, in knowledge of the actual present conditions, in judgment of men and of move- ments, to say nothing of sense of proportion, working power, pluck and grip, one feels, with that certain sadness associated with metaphysics, that many of these doctrinaires are considerably the inferiors of Mann." (p. 75.) Surely a man who would attempt "to persuade us to be all equal in talent, in education, and in privilege," can hardly be the superior in "valid intellectual energy" of any doctrinaires, however unreal they may be, even though he may have "a coruscating eye," which does not seem in this case to have done credit to its coruscations. If there be an absolute proof of incapacity for dealing reasonably with human affairs, it is the effort to persuade men to be "all equal in talent, in education, and in privilege." If Tom Mann does that, as this "human document" asserts, he devotes all the share of talent he possesses to knocking his head against a stone wall, which is not a very beneficial employment for human effort, nor one we should think likely to result in "valid intellectual energy."

Mr. Lynch has much too ambitious a style for a man of his wide reading and acuteness of vision. He is seldom simple and direct. He is always trying to be striking. To say of any writer, "He has a great idea of actuality and the pal- pitant association is never far away" (p. 167), is affected and not instructive. And to talk of "purple feelings" (p. 117) is still less so. But Mr. Lynch's style, though extremely ambitious and sometimes even inflated, is not so disagree- able as his arrogance, as, for instance, when he speaks of such a writer as Cardinal Newman in such terms as the following :—he is praising Mr. Spencer, and says of

"He has found the mind of his generation warped by the teachings of sophists, dishonest or abject, the Mansels or the Newmans." (p. 265.) If that had been said by some religious partisan concerning "the Spencers and the Bains," how indignant, and justly indignant, Mr. Lynch would have been. Yet he ought, with his wide reading, to know perfectly well that, however great his own contempt may be of the evidence for Christianity, some of the most powerful minds of every age have adopted it with all the depth and strength of their nature, and that it is not common-sense, it is not what a literary man can justify, to speak of such men in terms like these. In our own opinion shallower essays could hardly be found by any man showing evidence of a certain amount of ability, than the panegyrics on Mr. Spencer's and Mr. Bain's philosophy. We should doubt if Mr. Lynch had ever seriously studied the philosophy of religion at all,—say in the works of such a thinker as Dr. Martineau, whom even he would hardly accuse of being either "dishonest or abject." He has either swallowed his Spencer and his Bain whole, or, if not, he betrays not the smallest indication of having studied the other side. He has mastered Zola. Did he ever take the

• Human Documents: Character Sketches of Reprmontative Ken and Women of Hi. Tinw). By Arthur Lynch. London : Bertram DoboU, trouble to master Pascal ? He has evidently read portions of Kant. Has he ever read his Practical Reason ?

With the politicians Mr. Lynch is not quite so arrogant. At least he endeavours to be fair, though be does not by any means succeed. He tries, for instance, to do justice 'to. Mr. Arthur Balfour, but he is so full of disgust for aristocracy, that he fails miserably. Here is the key-note of his failure

Of the matter of Mr. Balfour's speeches, later on ; but the manner gives one somewhat the same feeling of discomfort as in looking at the movements of an hysterical lady. Mr. Balfour may be a genius, but he is not entirely a man. The voice is thin, flat, heady, altogether lacking in the sympathetic qualities of roundness and verve, rather scratching the tympanum with its squeezed-up notes, and irritating by its mincing mannerisms, and with an occasional sort of pasty reluctance in its languishing drawls. This is, however, the shibboleth of the aristocrat ; it is the voice of culture ; it is that most unmusical, possibly, of all human utterance, the voice of that Elegance of which Piccadilly stands for the Parthenon. And when we speak of his voice being

That in his earlier life Mr. Balfoar was somewhat languid. probably from imperfect health, is no doubt true. But no one who has watched him since he became leader of his party would speak of him as anything but a masculine politician. He is about as truly described as "a maladive flower," as "maladive" could be truly described as an English word.

In the sketch of Mr. Chamberlain Mr. Lynch endeavours with more success to be candid. Much as he dislikes him he makes the following very important and just concession :—

" His early speeches on Ireland are remarkably well judged; Liberal from the English point of view without being alarming, acceptable from the Irish point of view without demanding undue gratitude. Mr. Chamberlain wished to see a free and contented Ireland on the condition only of keeping the connection intact with England. He wished, in a word, to place Ireland in a position similar to that of Scotland—a programme that ought after all to have been acceptable to all Irishmen who, while desiring to see their native country as well favoured as possible, looked forward also to a final reconciliation with Great Britain."

Well, does not that concession explain Mr. Chamberlain's desertion of Mr. Gladstone without calling in the aid of all the selfish motives on which the remainder of the essay harps so much ? Mr. Gladstone was determined not to place Ireland in a position as favourable to the Union as that of Scotland, and both his schemes for Home-rule were in the estimation of most practical men as absolutely inconsistent with the Union as any practical arrangements could be ; why, then, should a strong man like Mr. Chamberlain, who really cares for the prosperity of the United Kingdom, be expected to put up with such arrangements only in order to please his party ? The sneer in the following passage, again, is quite baseless :— " To speak of Mr. Chamberlain's political morality to those who have read his speeches, past and present, would be simply absurd. Rather it behoves us to deal with the question as to how such a practical man could have left Mr. Gladstone. Certainly Mr. Gladstone had not treated him particularly well, for after five years' service in the Cabinet as President of the Board of Trade, Mr. Chamberlain found himself in '86—he, the great Chamberlain —not the second in the Empire, but somewhat lower in grade than before. Mr. Chamberlain in 1886 f gured to the world, not

as the Premier presumptive, but as President of the Local Government Board." (pp. 118-19.)

Now, as a matter of fact, Mr. Chamberlain was offered the War Office in 1886, and it was at his own instance that he

was offered and accepted the lower offioe of President of the Local Government Board in its place. It certainly was not from any feeling of hurt dignity that he left Mr. Gladstone in 1886. If he had but acquiesced in Home-rule, he would have occupied Sir William Harcourt's place on Mr. Glad- stone's retirement, and probably also Lord Rosebery's. Im- putations of this kind are not only uncharitable but gratuitous. Mr. Lynch is very proud of his descriptions of the physique of the subjects of his study; but so far as we can test them by our own knowledge, they are very faulty. In three cases at least we hold them to be extremely wanting in true insight. And in the case of Mr. Balfour and Mr. Chamberlain, we do not think that any really keen-sighted Radical would endorse them. As

a critic, we cannot think Mr. Lynch at all clear-sighted. To call Byron, for instance, a "genial" poet (p. 213), seems to us like deriving /ucus a non lueendo, picking out the very quality which the great cynic never possessed. But now and then Mr. Lynch is extremely acute. Here, for instance, in the essay on Rudyard Kipling (perhaps the beat), is a thought which has both subtlety and partial truth, though it wants a great deal

"Ben chien chasse de race. Kipling was one of the irritable tribe, indubitably. He bore the stamp in all his moods—the peculiar faculty of sympathy, as distinct a thing as tone of physical fibre, the love of quirks and turns, of bizarreries, brusqueries, the gay baroque of lively phrase, the Tang, the Schweif, the fetus; the love of words not merely as exponents of meaning, but as things in themselves. His vocabulary was already remarkably wide, and a graphic word was as dear to him as a bronze of Benvenuto Cellini to an amateur collector. There is something in all this that implies a dissipation of intellect. And so it is. The artist becomes endowed by the dis. integration of his own character, and in that disintegration he makes successively the discovery of its elements, he projects different capabilities of himself into overweening shapes in the perspective ; he understands by the devastation of his own pur- poses. In the hierarchy of men, the artist, the author, the histrion have in modern life been assigned too high a position."

That there have been and are artists who gain something for their art by the disintegration of their own characters, we agree. But that that kind of art is the type of all art we deny. What should be said of Aschylus, of Sophocles, of Milton, of Michael Angelo, of Dante ? May we not say of such men, as Matthew Arnold says of Sophocles, that they saw "life steadily and saw it whole?" And we maintain the same also of Shakespeare, though Mr. Lynch does make him,—in one of his pieces of pure guesswork,—a man "of shattered purposes," of "ineffectual desires," the "creator of mighty types," "the laughing libertine,"" the demigod," "the clown." There is not an iota of evidence for Mr. Lynch's view, except that Shakespeare could under- stand and depict characters which it is only reasonable to believe were as different from his own as Hamlet is from Polonius, or Caliban from Prospero.