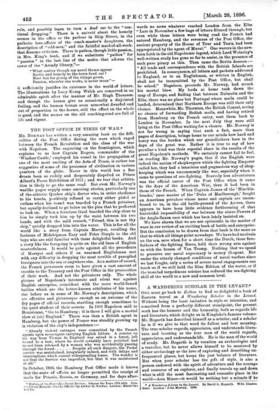 Ma. NORWAY has written a very amusing book on the diffi- culties of the Post Office during the wars which raged between the French Revolution and the close of the war with Napoleon. The engraving on the frontispiece, which explains to us how Captain Rogers, commander of the 'Windsor Castle,' employed his vessel in the propagation of one of the most smiling of the Arts of Peace, is rather too suggestive of some of the processes of civilisation in various quarters of the globe. Never in this world has a fine dream been so rudely and desperately dispelled as Prince Albert's Peace Exhibition of 1831; and we fear that arbitra- tion is likely to go the same road. But even Mr. Norway's warlike pages supply some amusing stories, particularly one of the athletic Quaker ship's doctor who, in strict obedience to his tenets, positively refused to carry either pistol or cutlass when his vessel was boarded by a French privateer, but equally declined to go below on the plea that be preferred to look on. When a ferocious Gaul boarded the ship close to him be simply took him up by the waist between his two hands, and with the mild remark, "Friend, this is not thy ship," quietly dropped him into the water. This is for all the world like a story from Captain Marryat, recalling the fashions of Midshipman Easy and Peter Simple to the old boys who are still familiar with those delightful books. And a story like the foregoing is quite on the old lines of English masterfulness. It would be quite against all the precedents of Alarryat and others if an unarmed Englishman met with any difficulty in dropping the most terrible of panoplied foreigners into the sea or anywhere else. As a matter of record, the French privateers seem to have given a vast amount of trouble to the Treasury and the Post Office in the prosecution of their work. And not the privateers only. The whole picture of Napoleon's inveterate and silent war against English enterprise, coincident with the more world-famed battles which are the better-known attributes of his name, rise before us in some of Mr. Norway's descriptions, which are effective and picturesque enough as an outcome of the dry pages of official records, startling enough sometimes to the quiet student of their secrets. In 1805 Napoleon said to Bourrienne, "Go to Hamburg ; it is there I will give a mortal blow at (sic) England." There was then a British agent in Hamburg, but the power of France was steadily growing up in violation of the city's independence :— " Already violent outrages were committed by the French agents upon messengers carrying English letters. A courier on his way from Vienna to England was seized in a forest, left hound to a tree, where he would certainly have perished had he not been released by a woman who was accidentally passing through the forest Despite all such dangers, the Postal >ervice was maintained, irregularly indeed, and with delays and interruptions which caused widespreading losses. The wonder is not that the Service was imperfect, but that it was maintained at all."

In October, 1806, the Hamburg Post Office made it known that the state of affairs no longer permitted the receipt of mails for Prussia, Russia, or Germany, and for days after- • History of the Post-t)ffice Packed Service bstseeen this Years 1793.1815. Com- piled from Records -Chiefly Official—by Arthur hi. Norway. Loudon: Macmillan ',id Co. wards no news whatever reached London from the Elbe "Late in November a few bags of letters filtered through, but even while these letters were being read the French had entered Hamburg, and the revenues of the Post Office, the ancient property of the House of Tour and Taxis, had been appropriated by the agent of Karat." One wavers in the new- born faith in the old Napoleonic legend, which Lord Wolseley's well-written study ha.s gone so far to assist, in the presence of such pure piracy as this. Then came the Berlin decrees :— "All trade and correspondence with the British Islands are prohibited. In consequence, all letters and packets addressed to England, or to an Englishman, or written in English, shall not be transmitted by the Post Office, but shall be seized." Napoleon, proceeds Mr. Norway, had struck his mortal blow. My lords at home took down the map of Europe, and finding that between Dalmatia and the Elbe, there was no place but Portugal where mails could be landed, determined that Northern Europe was still their only chance. Meanwhile, Mr. Thornton, the British Consul, seeing no chance of forwarding British mails, and having retired from Hamburg on the French entry, sent them back to London in November. In the next July they were still lying at the Post Office waiting for a chance. Mr. Norway is not far wrong in saying that such a fact, more than pages of description, brings home to our minds how hard and heavy was the burden which our grandfathers bore in the days of the great war. Rather it is true to say of how peculiar a kind was their especial share in the results of the great Napoleon's methods. We certainly cannot fail to feel, on reading Mr. Norway's pages, that if the English were indeed the nation of shopkeepers which the fighting Emperor called her, they had a tenacious and pugnacious way of shop- keeping which was uncommonly like war, especially when it came to questions of sea-fighting. Scarcely less adventurous was the official career of the Post Office when it came to the days of the American War, than it bad been in those of the French. When Captain James of the Hinchin- brooke,' once master of the 'Duke of Marlborough,' fought an American privateer whose name and captain are uncon- fessed to us, in the old battle-ground of the Azores, there appears to have been little evidence forthcoming of that fratricidal impossibility of war between the sister-Powers of the Anglo-Saxon race which has been lately insisted on.

We have shown that we are not optimistic in the matter of wars in our review of an exciting book of battle and enterprise. But the conclusion to be drawn from that book is the same as that to which all things point nowadays. We have had no rivals on the sea, save when for a short time the Dutch, those fore- fathers of the fighting Boers, held their strong arm against us with the broom of Van Tromp. Nothing that we spend to preserve our naval supremacy is money ill-spent. But under the utterly changed conditions of naval warfare since we last fought, only a series of severe naval engagements can teach us if we still hold the Blue Ribbon of the water, or if the ironclad torpedinous science has reduced the sea-fighting skill of the world to a new and common level.