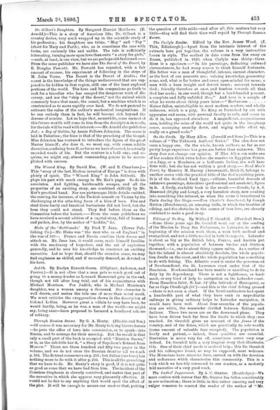 Judith. By Evelyn Everett-Green. (Oliphant, Anderson, and Ferrier.)—It is not

often that a man gets so much good out of going to a money-lender as Leonard Hammond gets in the end, though not till after long trial, out of his acquaintance with Michael Morrison. For Judith, who is Michael Morrison's daughter, was a woman among a thousand. Her character is well drawn, and makes the tale one of more than usual merit. We must criticise the exaggeration shown in the description of Colonel Loftus. However great a villain he may have been, he would hardly, being, as he was, a man of the world—we might say, being sane—have proposed to Leonard a barefaced echczne of robbery.