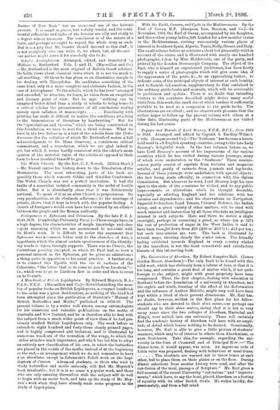 The Universities of Aberdeen. By Robert Sangster Bait. (James Gordon

Bisset, Aberdeen.)—The only fault to be found with this solid work, which has obviously been a labour of love, is that it is too long, and contains a great deal of matter which, if not quite foreign to the subject, might with great propriety have been compressed. Thus, the first chapter, dealing with education in Scotland before the foundation of a university in Aberdeen, and the eighth and ninth, treating of the effect of the Reformation and the influence of Andrew Melville, might very well have been kept within a third of their present dimensions. Mr. Bait has, no doubt, however, written in the first place for his fellow-. students who are devoted to their alma mater,—or perhaps one should say to their alnix metres, seeing that it is not so very many years since the two colleges of Aberdeen, Marischal and King's, were united into one university. These will certainly find the academic history of Aberdeen told here with an ampli- tude of detail which leaves nothing to be desired. Occasionally, however, Mr. Bait is able to give a little picture of students' manners, which may be of interest to others than Aberdonians, or even Scotchrnen. Take this, for example, regarding the uni- versity in the time of Cromwell and of Principal Row :—" The dinner-hour, it would appear, was noon. An ingenious code of Latin rules was prepared, dealing with behaviour at meal times.

The students are warned not to throw bones at each other, but to place them on their plates or on the floor. Daring dinner selections from secular history were read, and after the conclusion of the meal, passages of Scripture." Mr. Bait gives a fall account of the recent University "extensions" and "improve- ments," which have, to say the least, placed Aberdeen on a footing of equality with its other Scotch rivals. He writes lucidly, dis- passionately, and from a full mind.