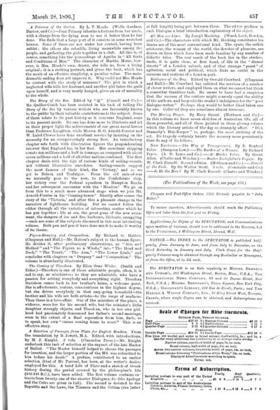 The Story of the Sea. Edited by "Q?' (Cassell and

Co.)— Mr. Quiller-Conch has been assisted in his task of telling The Story of the Sea by various writers who are favourably known to the public by their valuable contributions to the subject. Some of them relate to its past history as it concerns England, some to its present needs. No one has done more to illustrate and set in their proper light the achievements of our great naval heroes than Professor Laughton, while Messrs. H. O. Arnold-Forster and W. Laird Clowes have done excellent service by insisting on the necessity for an overpoweringly strong fleet. An introductory chapter sets forth with illustrative figures the preponderating interest that England has in her fleet. Her merchant shipping counts ten millions and a half in tonnage, as compared with about seven millions and a half of all other nations combined. The first chapter deals with the rigs of various kinds of sailing-vessels, not without illustrative anecdotes. Sailing-vessels suggest the most famous nf their kind, the Victory,' and so we get to Nelson and Trafalgar. From the old men-of-war we naturally pass to the new, to the Confederate ship, her victory over the Federal squadron in Hampton Roads, and her subsequent encounter with the Monitor.' We go on from this to a much more advanced stage when we join Mr. Arnold-Forster in his Conning-tower.' Shortly after comes the story of the 'Victoria,' and after this a pleasant change in the narrative of lighthouse building. But we cannot follow the editor through all the varieties of interesting matter which he has put together ; life at sea, the great guns of the new arma- ment, the dangers of ice and fire, harbours, lifeboats, smuggling —such are some of the subjects discussed in this most interesting volume. Both pen and pencil have done much to make it worthy of its theme.